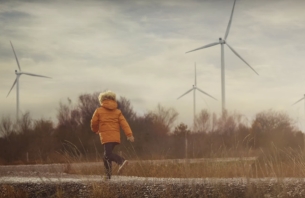 Global creative agency, Rothco, has created a campaign on behalf of the Irish Wind Energy Association (IWEA) to highlight to the people of Ireland that they have the power to power themselves. It comes as a shock to most that Ireland is one of the most energy dependent countries in Europe, yet it already has the means to secure its energy future for generations to come with renewable energy. Currently they produce only 15% of their energy domestically with a staggering 85% of energy needs imported.

Rothco Account Director, Aedamair Cassidy, comments: “We started with a simple insight; most citizens in Ireland don’t yet understand just how dependent we are on energy imports or that we have at our fingertips what we need to be much more self-sufficient. Our weather is one of our greatest natural resources, but that’s not a perspective most people have.”

Through the words of John F. Kennedy, spoken to the people of Ireland during his visit in 1963 - and powerful images from the real people and landscapes of Ireland – the campaign gives the audience an understanding of their real potential as a country, aiming to get the nation behind their ability to power themselves. It’s a message of hope and optimism grounded in real facts. They are one of the best placed countries in the world to harness clean, renewable energy in every corner of the country. With the power of wind energy, they could vastly reduce their reliance on imports from volatile fuel markets and instead produce their own clean, renewable electricity, moving towards energy independence.

Discussing Rothco’s approach, Aedamair says: “Our tone was rooted in the idea of national pride. We wanted to make Irish chests puff out as they listened to one of the most important figures of the 20th century talking about our country in such glowing terms. It was important to make the conversation relevant for today’s audience, so we chose visuals that depicted a modern Ireland.”

The films for the campaign strike a delicate balance between music, audio and visual imagery in order to evoke the emotive national pride and independence of the Irish people. To achieve this Rothco commissioned still photography of modern day Ireland and had post production house Windmill Lane bring it to life with subtle movement. A bespoke score was also composed by Emmett Cooke to hit the various emotional highs.

Explaining the brief Rothco developed for the campaign Aedamair adds:

“Striking the balance between music, audio and visual imagery was singularly the most important element in making this commercial work. We knew we had to give Kennedy’s words room to breathe, but also we had to complement them with a soundtrack and visual narrative that would heighten the emotive effect of such a powerful and inspiring speech. But everything had to be restrained and limited; the speech needed to be the hero that was complemented by everything else.”

The multi-media campaign includes TV, online video, radio and outdoor.  The online film launched on 4th January, with the TVC to launch nationwide on 11th January.