JetBlue and Rokkan are Flying to Jamaica From Jamaica 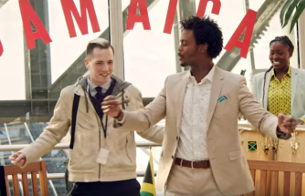 Changing trains at Jamaica Station can be one of the most hectic and challenging parts of a New Yorker's commute—especially in the middle of winter. As New York’s Hometown Airline, JetBlue wanted to turn a cold and dreary rush-hour ritual into a tropical escape. In partnership with the Jamaica Tourist Board, JetBlue found 15 commuters at Jamaica Station who were willing to change their daily routines by trading in their Jamaica Station train tickets for a Jamaica plane ticket. The reward for their willingness to give up their commuter tickets? A JetBlue Vacations package (air + hotel) to Montego Bay! (And yes, JetBlue returned their train tickets; their local crew members have their own!)

Rokkan led the creative and production for this campaign, which showcased the Jamaica Station ticket exchanges. The resulting film will also be supported by paid media placements and social influencer activations, which are being handled by Mullen Lowe, JetBlue’s Agency of Record. You can view the final long-form film via YouTube here. Still images are also available upon request. Complete campaign credits are pasted below for your reference.

Additionally, for those who weren’t at Jamaica station but are on board for a for a track-change of their own, JetBlue also has some exciting promotions planned. For a limited time, catch a #JetBlueFlashFares from New York (JFK) to Montego Bay with fares from $20 one-way. Restrictions apply. And save up to 65% on select hotels when you book a JetBlue Vacations package (air + hotel) by February 6 for travel March 15 – April 30, 2017. New bookings only. Restrictions apply.