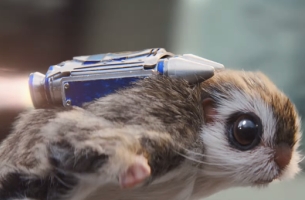 The UK welcomes a new member to the Sweeet family, as McVitie’s Breakfast debuts its first advertisement with an oaty high flier.

With the help of the brand new jet-powered character, the 30 second advertisement from McVitie’s Breakfast will premiere on 8th July and will run across high-profile programming for a five week period. The advertisement, created by Grey London, is kick-starting the media investment from McVitie’s, the nation’s favourite biscuit brand, to launch the next generation of breakfast biscuits.

The much loved McVitie’s Sweeet family has expanded with the adorable addition of a flying squirrel –fully equipped with a jet pack. The fluffy flier has been cast to reflect the oaty oomph received when eating the McVitie’s Breakfast Oaty Breaks.

The advertisement opens with a tired-looking office worker on her morning commute –something many can relate to –when her partner opens a pack of McVitie’s Breakfast Oaty Breaks. Suddenly, the cute flying squirrel appears out of the pack. Flying through the air to the tune of classic 80’s TV show Airwolf, and powered by a jet pack, the flying squirrel lands safely in the hands of the tired worker, delivering the oaty oomph needed to get her morning going. The ad concludes with the end line; “The Oaty Oomph of McVitie’s”.

McVitie’s Breakfast will launch the tasty range with a £3 million media spend including TV advertising by Grey London, social media plan with MEC, as well as a PR activity from 3 Monkeys Communications.

Head of Healthier at United Biscuits, Kerry Owens said:“The launch of McVitie’s Breakfast advertising campaign marks another momentous occasion for us, with further expansion into the healthier breakfast biscuit market. With 55% of us eating breakfast on the fly, it’s no surprise that the healthier biscuits category is worth £467million, and breakfast biscuits have been driving the growth in this category.

“We recognise that modern lives are starved for time, but hungry for tasty on-the-go breakfasts, so we’re delighted to introduce the latest additions to our McVitie’s Sweeet family, and hope that it brings an oaty oomph to breakfast-loving folk across the UK.”