Jeremy Renner Saves the World... A Whole Lot of Money in BT Spot from AMV BBDO 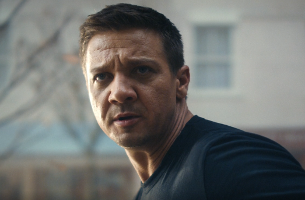 Oscar nominated Hollywood action hero Jeremy Renner, is to star in BT’s latest ‘behind the scenes’ advertising campaign. It will promote the BT Mobile Family SIM: a new product to the mobile category and the first in the UK designed for families where the savings get bigger with each SIM that’s added to the plan.

Created by AMV BBDO, the new campaign broke on Tuesday 27th December and is running on TV, radio, outdoor, digital and social media.

The ad begins like a scene from an action movie and uses Jeremy’s skills which he showcased in roles such as Hawkeye in The Avengers series, The Bourne Legacy and the Mission Impossible franchise. A figure slides down a roof, somersaults off a café awning and lands spectacularly next to a family who are sitting engrossed on their mobile phones. It’s Jeremy shouting, “I’m here to save your family!” The BT clients look thoroughly confused and the misunderstanding is revealed: Jeremy thought he was there to save the family, when actually he was hired to save the family money with the New BT Mobile Family SIM.

The pun on ‘saving’ is played out further in the radio ads and the OOH mimics the style of an action movie poster where Jeremy stands protectively in front of the family. Short films running on Facebook feature Jeremy answering questions from the public about how he would save them in a variety of entertaining scenarios.

Jeremy Renner said, “The U.K. is like my second home and I am thrilled to be a part of the BT Mobile Family SIM campaign”.

Dan Ramsay, BT Consumer Marketing Director said: “Family SIM has been designed especially for families with their needs at the heart of it. We wanted to recognise and reward our customers with a saving for each additional SIM they take with us.”

BT’s new ad campaign coincides with the company having recently launched Family SIM in a move that will expand its presence in the consumer mobile market.