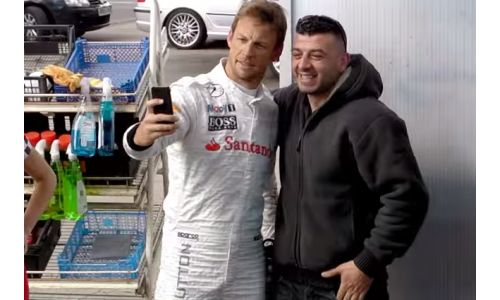 ‘Get Personal with motorsport’ – true to this motto, Mobil 1 continues bringing people closer to motorsport, as proven by the new ‘Car Wash’ video featuring Jenson Button. The filming for the Mobil 1 advert took place in a busy Esso Service station in South London where motorists were taken by surprise with a high tech Grand Prix style Car Wash.

The star of the video and 2009 Formula 1 World Champion, Jenson Button, commented on the stunt: “We had regular people coming in for a car wash: when they get out of the car they get proper Grand Prix treatment. They get two lovely ladies that give them a soft drink and 14 mechanics washing the car and just going at it flat out.  And then I turn up in my Formula 1 McLaren car like I’m the next in line for the car wash and jump out”.

He added: “The reactions were pretty awesome, there’s obviously shock and loads of picture-taking... but then they start acting normal like this is a standard situation. One of them actually asked me: it’s not always gonna be like this, is it?! Yeah, it’s awesome, and on film it looks pretty good!”.

Brief (in one line): Drive Mobil 1 brand awareness and engagement through motorsports sponsorship.