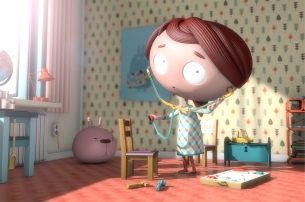 Oscar nominated directors Job, Joris & Marieke have announced their latest film (Otto), which will be premiered during the 40th edition of the Toronto International Film Festival this September.

In this charming 10 minute short, a little girl loses her imaginary friend to a woman who is unable to have children. The film follows the pair on a sad, and thought-provoking journey, beautifully designed and animated in JJ&M's unique and distinguishable style.

Earlier this year, JJ&M’s film A Single Life was nominated for an Academy Award. Since then, the film has won 13 international film awards.