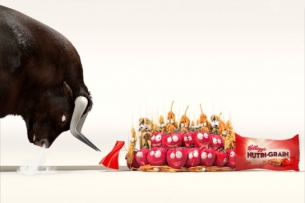 This week jelly London welcomed Mael François to the jelly London Directors. Head of Creative Comms Rachael Guiver spoke to Mael about working with Pixar, where his inspiration comes from & his plans for 2015.

Mael is a master director of CGI, believing that with animation you can build any universe, and give life to any story. Working with an impressive array of internationally renowned clients, including Hyundai, Rayban, Kelloggs, Nestle and BNP Paribas.

His expert knowledge has led him to work with the very best, from Framestore in London to Pixar. Working his lighting magic on films such as Toy Story 3, Brave and Cars 2. He elevates the ordinary to something beautiful through his incredible use of lighting which can be seen in both the Rayban and Nao spots. Drawing inspiration from classical literature, comic books, everything and anything to create truly stunning work.

RG> Tell us how it all started.

MF> I first planned to be an engineer but half way through my studies I realised that it wasn't exactly for me and I took a break to think about reorienting myself. As I had always been interested in arts, drawings and computer stuff I discovered a computer graphics magazine called “Computer Arts" showcasing a lot of 3D stuff with a free demo for a CG software, that’s when I bought my first computer and I’ve been hooked ever since!

RG> What’s a typical day like for you? How do you come up with all your new concepts?

MF> I wouldn't say that I have a typical day, unless pitching a lot of ideas and looking for concepts in a big blur counts! As I am an avid reader a lot of my ideas and references comes from literature, be they animation or not. I am a huge science fiction geek but I read about everything, as I think that most ideas come from common cultural roots, especially classical literature.

In terms of movies the ones that I love the most are the ones where the story is the centre piece, a film needs to make me dream while at the same time being consistent. Which might be why these day I am more into television series than film as I feel that this an amazing format to develop a story and universe without rushing into anything.
I also spend a lot of time reading French comics and design blogs/portfolios.

RG> What do you love most about your job?

MF> No project is ever the same! I work with a lot of amazing people and the enthusiasm and energy is an amazing feeling, inspiring you to want to work in the morning. Lastly I have been pitching ideas for luxury watches, character animation and robots! It forces you to constantly revisit your references and art, which is great as the commercial market moves so fast that if you don’t reinvent yourself you can very quickly be left behind.

RG> What is the most challenging part?

MF> I think that the most challenging aspect is to make sure that everybody, from the client down to the agency, producer and artists are on the same page. It is easy to think that we all agree on something only to realise (often late) that words will have a different meaning for different people, or that nobody imagined the final result the same way. As we are working in a purely virtual environment it is important to be certain that the concept and final product is as clear as possible for everyone involved. This is especially true in CG where the creative and production process can be long, frustrating and sometimes scary if you are not used to it.

RG> You’ve got an impressive show reel, tell us a little about what it was like to work for Pixar?

MF> It was a great experience. I have watched every Pixar movie every year! When I started to work there my first assignment was a shot with Woody on Toy Story 3! It was fantastic to work with these characters and somehow help to give them life. Having the opportunity to work with Buzz when he is speaking Spanish and dancing, and lighting Mike and Sully in monsters was like playing with heroes from my youth.

The people over there are great, and never miss an opportunity to have fun. For example on Cars 2 when someone's shot in the lighting department was approved, we all gathered together and the person to complete the most work during the week had to wear and "customize" it a special jacket. Needless to say this jacket got pretty crazy, with extra arms, light bulbs, flashing LEDs and so forth... So it was better to wear it sooner rather than later! It became a kind of trophy that was passed around in the team during a year.

MF> I will always have a small preference for Al Dente as it was my first film. We had a lot of fun mixing up techniques and styles between CG and painting, something that I would be curious to explore again. But what makes every project special is that while they all had different styles, designs or challenges, I try to mix everything I have learnt or was successful previously into the next project. It’s a bit like my own small evolving ecosystem!

RG> What do you think will be the next big thing in animation?

MF> I might be wrong but it seems that there is a lot of interest in web series right now amongst clients and agencies. I think that as commercial animation is starting to gather steam, especially in the UK but also now in the French market, we might start seeing more animated web series’ soon.

RG> What does animation do that other mediums can’t?

MF> To be able to answer this you have to think of animation in a broader sense than cartoons or Disney and Pixar style animation. If you include realistic CG, motion design and special effects you can build any universe and give life to any story in animation. This can be done with conventional techniques but often at an enormous cost. Animation gives you some flexibility in revising and improving your work, whereas in live action you have what you shot and that's it.

RG> What would be your perfect brief or dream client?

MF> I would love to direct a video game trailer or movie opening/closing title, that would be my dream brief! My dream client would be one who trusts me completely with a project, and understands that in 3D most of the “nice stuff” comes towards the end, everything before that is rough and in progress. It can be a worrying process unless you can imagine what it's going to look like in the end, and trust me to make it look great.

MF> I am currently working on a short film that I have been developing since the end of 2014, I have a few months of production ahead of me, but I hope to have it completed this summer.

MF> Fun fact : I’m not really into sugary things, when given a choice between a cake and a sandwich I will always go for the latter!

RG> What’s your favourite music to work to?

MF> I usually have my music library playing randomly, which can make for some pretty interesting transitions !

RG> What’s your favourite decade and why?

MF> I don't really have a favourite decade, for all of its errors and good things I love the one we are living in.

RG> Tell us something about yourself that we didn’t already know. (Strange facts)

MF> As it happens I am French but keep it to yourself!