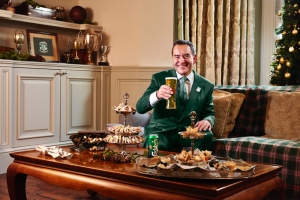 The ‘King of Football’, Sky Sports’ Jeff Stelling, will address the football nation on Boxing Day, in a ‘King’s Speech’ that reviews the season so far, as part of The Marketing Store’s Mid Season’s Greetings festive campaign for Carlsberg UK set to reach 1.6 billion consumers.

Stelling, who is also the face of the Carlsberg Fan Squad, will present his speech on the Festive Football Calendar hosted at www.CarlsbergFanSquad.co.uk/Christmas on December 26th ahead of the day’s matches. A teaser of the speech by Copa90 Football Channel, launched this week, available to view on the website.

The Marketing Store created the King’s Speech content idea as the pinnacle of the Carlsberg’s Mid-Season’s Greetings campaign. The agency came up with the concept and was responsible for script-writing, production and developing the seeding strategy.

The Marketing Store’s campaign is based on insight around the psyche of football fans on Boxing Day. For them, Christmas is the real business end of the footballing calendar; when the games come thick and fast; when those summer signings get found out; when early league leaders start to slip; and when the true challengers start to show themselves.

Not everyone spends their Boxing Day recovering from the festivities and the turkey excesseses of the day before. Over one million football fans are up as early as 6am, ready to put in a shift supporting their team; traversing the country; battling against the winter elements.

The campaign captures this passion by giving fans the opportunity to take stock of the football year with the ‘King of Football’ himself. The review goes beyond stats analysis to offer not only Jeff Stelling’s view on 2014, but the views of the fans themselves.

The production company on the film was Irresistible Films. The one-day shoot was filmed in a luxurious London location and directed by Richard Pengelley, known for his comedy work on TV show Crackanory.

Dharmesh Rana, senior brand manager for Carlsberg, said: “We are really excited to have Jeff on board as part of this campaign and we’re sure all our football fans out there will enjoy his alternative speech on Boxing Day.  This campaign is designed to support our customers during this vitally important time of year – as well as continuing to strengthen our long-standing association with football.”

Sav Evangelou, executive creative director at The Marketing Store, said “Jeff’s King’s Speech is yet another way for Carlsberg to play a role in football fans’ lives, but, much like Her Majesty’s annual message, Jeff’s speech will form an enduring record of another memorable football year that lives beyond advertising”.