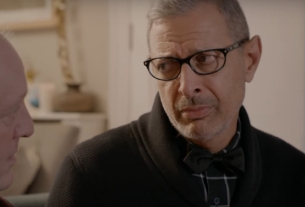 Currys PC World today unveils their brand new, first-ever Christmas campaign; Spare the Act. Featuring acting legend Jeff Goldblum, the ads aim to demonstrate that Currys PC World understand Christmas doesn’t always live up to our idealised expectations at times, and sometimes we need to act to maintain the Christmas spirit.  The ads will aim to position Currys PC World as the solution; with the right electrical product, there’ll be no need for acting this Christmas.

The campaign features five different executions and each one will break over five different days, starting on air from Thursday 5th November. The first instalment of the £10 million campaign features the Nespresso Inissia Coffee Machine with the four alternative executions highlighting Google Chromecast, an LG 4K OLED TV, a Bosch 3D Oven with Hot Air technology, and the intel-powered Microsoft Surface. The campaign will include a collection of 40, 60 and 90 second ads, with a fuller length 2:30 minute hero ad focused around the intel-powered Microsoft Surface.

Rolling out across TV, cinema, Video on Demand, radio, print, social and online (YouTube), in the UK and Republic of Ireland, the ads will appear during some high-profile television slots on Saturday 7th and Sunday 8th November, including XFactor and Downton Abbey.

In each of the five ads, we peek into a different Christmas scenario where characters are faced with an underwhelming moment, including receiving a disappointing Christmas present, being served burnt turkey, or straining to watch a Christmas film on an old, small TV set. As each of these moments unfold, and our protagonists struggle to hide their disappointment, Jeff Goldblum appears with some friendly acting advice to help the British public through those awkward Christmas moments. Goldblum’s advice is to be empathetic with your friends and loved-ones, and instead imagine the perfect Currys PC World product to hide your disappointment.

While the ads are full of humour and surprising moments, they also demonstrate that the retailer has everything you need to get ready for Christmas, from furnishing your home in preparation to host family and friends, to the latest in technology gifts.

The ad campaign will also be supported by a nationwide digital campaign, which will launch on 9th November.

Gary Booker, Chief Marketing Officer, Dixons Carphone: “We love Christmas and we know our customers do too, but we also know that in reality it comes with its fair share of family politics, awkward moments and disappointing gifts. Our Spare the Act campaign is made with this is mind, reminding customers that we understand them and that we’re there for them; whether it’s for preparation, entertainment or gifting.”

Jeff Goldblum: “I'm delighted to be involved in this clever and timely campaign that will hopefully help people find the perfect holiday gifts for the people they care about most - without all the risky guesswork. It's so disheartening to put your heart and soul into a gift choice for a loved one only to discover they have three of them already - and don't use any of them ever.”

Alex Grieve and Adrian Rossi, Executive Creative Directors, AMV BBDO: "Nothing is more powerful than the truth and the very real truth at Christmas is that most of us receive rubbish presents. And because we're nice and good and wholesome people we shield those we love from this stark reality. We act. This campaign playfully reminds us there is an alternative. Go to a place that understands what people really want. Go to Currys PC World and spare the act this Christmas."

David Shane, Director, O Positive: “Gift giving is so fraught. Does she get me?  Does he listen to me when I drop unsubtle hints? This was a really rich idea, and the scripts were smartly written with great space for the actors to improvise and really open up in their own way. Mike and Ant, the scriptwriters, were great; smart, funny collaborators. As for Jeff – I’ve never seen such a committed, generous actor. He’s an amazing presence on film - he’s got this real physicality and is also this amazing interior actor, you can see him thinking all the time. It’s a rare combination.”