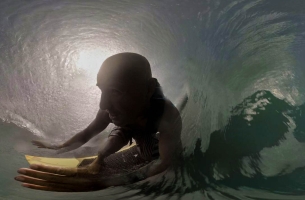 Venice, CA-based Specular Theory has been making waves in the virtual reality scene with their immersive VR storytelling and innovative tech—and now they’ve literally made waves. The creative studio was tapped by creative agency Xister to craft a live-action VR surf experience in conjunction with Jeep’s partnership with the World Surf League, using proprietary technology to capture a first-person point of view of surfers, shooting on location in Malibu, CA and Mexico. The VR experience allows even the most novice swimmer to catch a swell while fully immersed by the surrounding ocean and sky above. The experience is currently being showcased at the World Surf League’s 2015 Samsung Galaxy Championship Tour across Europe.

Using the Samsung Gear VR headset, viewers will get the opportunity to see and feel what it’s like to surf at world-famous surf locations in California and Mexico, ride inside a huge barrel, try their hand at gnarly surf acrobatics and drop in like a pro.

To fully submerge viewers into the surfing experience and capture footage that was usable and viewable, the Specular Theory team chose to use a first-person viewpoint, allowing the user to feel that they are surfing the waves themselves. Since the camera could not actually be placed in the surfer’s eyes, Specular Theory created a custom post-production pipeline to simulate this viewpoint.

“Shooting virtual reality is still an extremely difficult undertaking, especially in action sports and particularly in water,” notes Specular Theory Founder/CEO Morris May. “We wanted this experience to allow fans to really feel like they are surfing in Malibu, CA.” Adds Specular Theory CMO Ryan Pulliam, “VR gives people a chance to experience something they may not otherwise get to experience and that’s a very powerful thing. This virtual reality experience allows you to see and feel what it’s really like to paddle out, catch a wave, hang ten and even get barreled. The Jeep® Brand is fully immersing World Surf League event attendees into the surf action and literally giving fans the ride of their lives.”