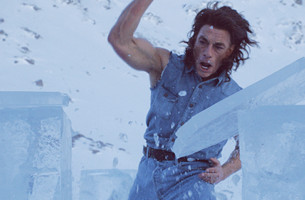 The all new Ice Bar campaign is the latest chapter in JCVD’s on-going quest to get as close as possible to the ice-cold refreshment of a Coors Light. This time he’s gone one step further - he’s built his very own ice bar high in the Rocky Mountains.

The Ice Bar campaign kicks off with a full 60 second spot seeded today on social media, to be followed by TV and cinema launch on Friday, 22 August.  An epic experiential campaign with actual ice bars being built in London (7 nights, Dec 2014) and Manchester (7 nights, March 2015) hosting intimate gigs with Brit-award winning London band, Rudimental and guest DJ’s really brings the ad to life with the key 18-34 year old audience.

The campaign culminates with a once-in-a-lifetime opportunity for a lucky few consumers and their friends to have a unique ‘closer-to-cold’ experience at the Coors Light ice bar in Austria.

The new TV ad opens with pounding 80s music, whereby the audience is treated to an epic action movie-style montage of clips of JCVD as he goes about building his ice bar in the Rocky Mountains. With his bare hands and feet we see him at work, going back to his roots, pulling an ice sledge up the mountain face with just his mullet and karate-chopping solid blocks of ice. He furiously chips away at a block of ice to reveal a jukebox, and kick-carves a bison head. We even see him laying out the finishing touches – an ice plant here, a fur rug there - before he steps back and admires his handy work: the finished bar.

The creative concept for the campaign was conceived by VCCP, with social activity, TV content and cinema created by VCCP. The experiential activity was developed and implemented by LIFE Experience, a division of LIFE agency.