Trends and Insight 402 Add to collection 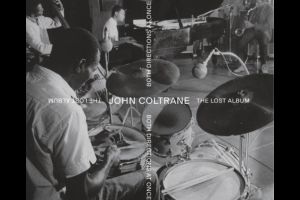 It is hot. Really hot. Like, eggs frying on pavement hot. A London summer that keeps burning.

Lucky for us, there is also a seemingly unstoppable flow of records flying out. Some call it street jazz, the new jazz and some say it just an update of broken beats. Whatever, you could argue all day about category, genre and all of that. Or, you could just get on with listening.

Anything with Moses Boyd, Shabaka Hutchings and Henry Wu is going to be worth buying. Total Refreshment Centre, Servants Jazz and Café Oto keep the jazz thirst quenched. 22a keep the quality dangerously high. Be careful though, the usual pattern is just beginning to appear. Dodgy comps, unnecessary remixes and below standard singles. 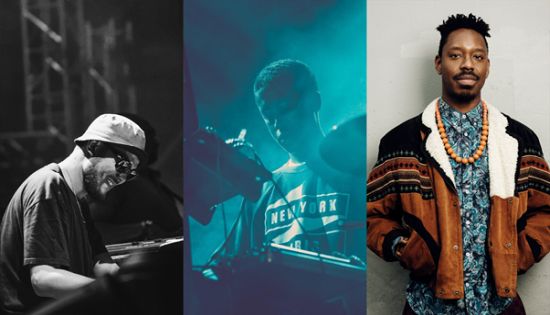 Mostly, though, it is a hot, rich and fertile period for jazz. Literally, as we speak an album drops through our letterbox. 'Earth' by Emanative. Released on the venerable Jazzman label. The label was best known for unearthing amazing old jazz. That they are behind the kit on new jazz is inspiring. We will, at some point, get a review up of the Emanative record. It’s been a long time since so much music from a movement has been dropping. Keep it coming.

Then, what about new jazz that is really old? There has been a storm of excitement for a few weeks now about the release of a newly discovered album by John Coltrane. It is not usually terribly fragrant when a 'lost' tape turns up and is mastered and released. The words 'bottom' and 'barrel' come to mind. There is, of course, nothing usual or typical about John Coltrane.

For an album that was only released a couple of days ago there is already a vast amount of good quality, informed critique out there. You know where to look. If you buy a copy there is an exhaustive essay in the sleeve notes that is worthy of release alone.

Before we jump off I might suggest, unless you’re a hardened Coltrane fiend I would opt for the standard version. Just saying. Unreleased, alternative versions of an unreleased set of tunes might be too much.

A faint engineers voice is heard giving a session number. No title. A number. Coltrane supported by McCoy Tyner, Jimmy Garrison and the quiet storm drum of Elvin Jones. Less of a band and more of a crack assassination unit tasked with destroying jazz convention. For a sound so spiritually heavy it floats. Much of the story surrounding this record relates to the atom split detonation of ‘A Love Supreme’ a year later. Anyone expecting the sheets of noise, blast force ecstatic howl of that album will be disappointed. This is a classic line up moving with a lithe grace through a gorgeous modal dance.

When this session was recorded in 1963 Coltrane had already struck commercial gold with his restructuring of ‘My Favourite Things’.

Any notion of him playing safe by tackling ‘Nature Boy’ is destroyed immediately in the first two bars. McCoy Tyner stepping out for this number gives a lean, piano-less stealth. More space. Coltrane connects with the strangeness and otherworldly melancholy of the song. His sax snakes like smoke around a smouldering rhythm. Elvin Jones firing intricate, metallic flares. Jimmy Garrison is bringing in a hard angularity to the bass. Copping the brutality of the Gary Peacock / Albert Ayler moves which were sending shock waves through the jazz world. They keep it to a pop acceptable three minutes and 41 seconds. Perfect jukebox bullet. 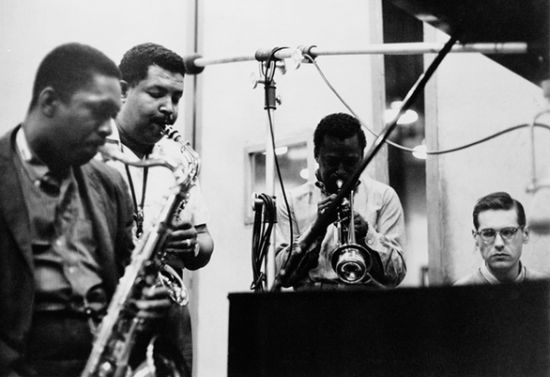 Think of when this was recorded. 1963. LSD and psychedelics were being experimented with at Harvard and Yale with the full backing of the government. High grade Sandoz LSD was escaping from the labs and into the intellectual social scene.

Add in a Vietnam war that was just becoming gangrenous, a neurotic fear of communism and a civil rights movement that was on the very edge of war. This lethal brew was heavily present, maybe the reason for, ‘A Love Supreme’. It is more subtly at play here in this slightly earlier shift. Listen closely and you hear the musicians beginning to shed familiar patterns. The band begins to literally look in a different direction. Upwards. Looking straight into a new sun. For the remainder of side one, the band increasingly writhes and coils. Threatening to unleash but always holding back.

Coltrane never copied anybody. He did, though, absorb the essence and nuances of everybody he played with and everything he listened to. Despite a recurring junk habit he was furiously active. Miles, Ellington, Monk, Parker, Eric Dolphy and his fascination with Indian music. There are strokes, dapples and shadows on this record that reference his entire creative DNA.

Turn it over. Let’s assume you bought this on vinyl. Seems right. The effort of flipping the vinyl is rewarded by a confident drop of impressions. It would become a staple of the Coltrane legacy. It is, without doubt, born from listening to ‘So What’ by his old spar Miles Davis. This take is light and polished. It twists and turns with the agility of a dancer or a perfectly tuned Alfa Spider on a tight bend. It is worth, alone, the price of purchased. Then again, every track is worth the album’s asking price. 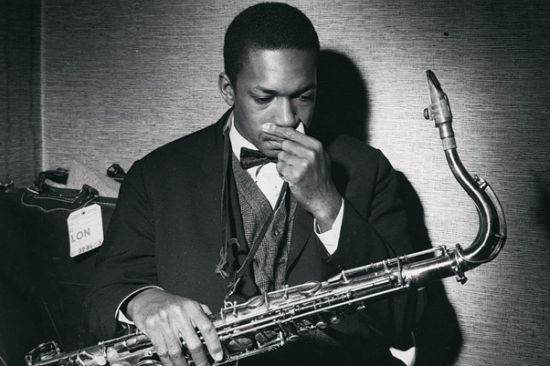 A languid, unhurried, slow blues comes next. Almost 12 minutes of circling, moving, simmering and menacing challenge. Here, this is jazz after hours. After entertaining diners, tourists and expense account advertising execs, this is the band cutting lose. Playing inwards. For themselves. It is hypnotically beautiful. ‘One Up, Two Down’. This has been circulating on a legendary bootleg for years. Here, it sounds incredible. A stack of harmony and rhythm that defies gravity. This is jazz challenging itself. A reckless gesture that maybe hints at the inner turmoil of Coltrane, and indeed, the legion of jazz musicians torn between spiritual artistry and narcotically sick stray dog shame.

And it’s over. Repeat play. It took 55 years to get this out. It does not belong in the cult of music that you listen to on your phone for a week then move on to the next thing.

This is the real deal. Picasso, Dylan, Pynchon and Steinbeck. This is the American artform. Back in the Now!

We owe Impulse! For doing such a great job on this. We owe them a nod for their service to jazz. Not just for the legacy stuff but, more, for being on the crest of now. It’s only a matter of weeks since Sons of Kemet dropped their double bomb ‘Your Queen is a Reptile’ – savage, graceful, noble and thundering. A provocative throw down worthy of the Impulse! logo on the label. 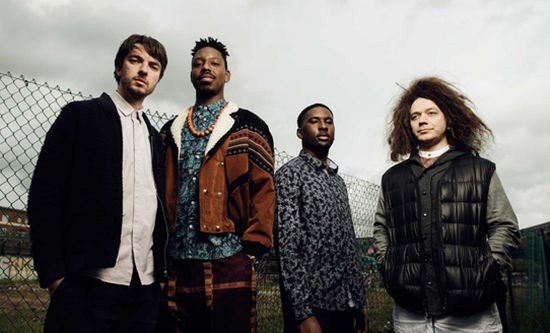 The album dropped in a period where we are all deeply engaged with the contemporary jazz that keeps firing out. For us, with a few exceptions, London is the source. Sharp music that avoids the flab, no unnecessary filler. Just solid, deep music that glances at heritage and knows its story but nods its head at the future.

The cynical amongst you might wonder why this album has emerged now, just as anything with 'Jazz' on the label is selling like beer on a tropical beach. Maybe just a coincidence. The music industry rarely does anything by coincidence. Just saying.

So, things like the Coltrane discovery. Great, no doubt about it but no more essential, in our mind, than a Mo Kolours or a Tenderlonious side. Like the jazz wisdom used to say, 'There are only two types of music. Good and bad'.

Let us chuck a few more chops for you. Try Kamaal Williams, Blue Lab Beats and Puma Blue. Still got space in your bag? Here you go! Joe Armon Jones. There is a truck full more to go through but get going with these. No berets, this ain’t the weather for roll necks, and no zoot suits. 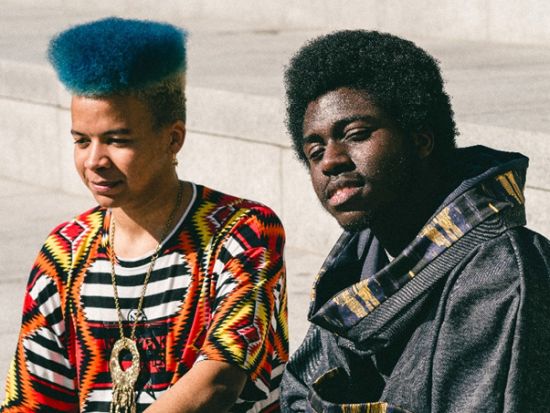 This jazz lives on the street. This jazz movement is not a revival. We’ve seen that one before. This is music that does not want the audience to sit in respectful silence. This is music to destroy dance floors to. That same electric heavy atmosphere at Plastic People has drifted into basements in Dalston, Peckham and beyond. Follow your senses and you will find them. Get there and you will see no chin stroking. No contemplative nodding. Just young people losing their shit on the dance floor. It will be hot. It will be loud. It will kick like a Shaolin Monk.

We waited a long time for this. A jazz that does not want to be intellectualised. You don’t need to read anymore. Just get listening.