Competition launches with winners being announced this Sunday 14th 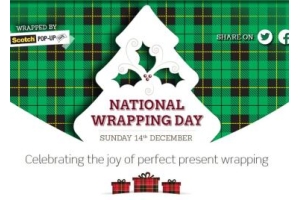 Sunday 14th December marks the first ever National Wrapping Day, sponsored by Scotch Pop-Up Tape. To recognise the occasion, Scotch has been running an online competition with the winners being announced on Sunday.

Celebrating the joy of perfect present wrapping, Jaywing devised the concept for National Wrapping Day and has worked with Scotch to bring it alive with the aim of raising awareness of Scotch Pop up Tape and Handbands. Sunday 14th December was selected for the day, as this is when people are statistically most likely to wrap their Christmas presents.

To generate a buzz in the lead up to Sunday, Jaywing developed a competition, which has seen Scotch fans voting through social media to decide which present expert wrapper and blogger Jane Means would wrap. Eight winning presents have been selected and fans now have the chance to win them by tweeting during National Wrapping Day using the hashtag #wrapday.

To add an extra dimension to the competition, fans could also suggest a wild card present – the crazy objects they would like to see Jane wrap. Those coming up with the best suggestions have received a wrap bundle, including some Christmas goodies and Scotch Pop Up Tape.

On Sunday, nine videos of Jane wrapping the most voted for presents, including the chosen wildcard, will go live. Jane, widely known as the "Gift Wrap Guru”, will demonstrate how easy it is to wrap presents using Scotch Pop-Up Tape. Those watching can pick up a few tips for their own Christmas present wrapping.

As well as coming up with the concept of National Wrapping Day, Jaywing designed and built the website and has developed and delivered the associated competitions. Having identified which blogger to use and getting her on board, Jaywing created the social media strategy for Scotch’s National Wrapping Day and produced the nine present wrapping videos.

Brían Taylor, Digital Marketing Managing Director, Jaywing said: The creative inspiration for National Wrapping Day came from the insight that most people wrap their Christmas presents on the 14th December. Scotch can now ‘own’ this day since the Pop Up Tape is a must-have wrapping accessory. It’s been a great project to work on as it incorporates strategic thinking with the festive spirit. The suggestions that fans have sent in have been very fun to read! It has been brilliant working with both Scotch and Jane Means to produce this campaign.

Sarah Downing, Scotch Brand Manager, said: “Scotch is really excited about our 2014 Christmas campaign “National Wrapping Day”, which Jaywing proposed to us earlier this year – and it’s finally here after months of preparation from both parties. It has generated buzz within the industry, and we can’t wait to see what Jaywing has done with the National Wrapping Day videos we will be launching live on Sunday.”