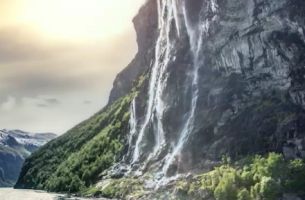 The Mob's Jason Fisher-Jones has just directed this beautiful campaign for Viking Cruises' new ship the Viking Sea, filmed around the Mediterranean on its maiden voyage - you Londoners out there may have spotted its naming and firework display in Greenwich recently.

The TV commercial and 11 idents for ITV3 early evenings were commissioned by Atomic London.