Japanese Advertising Showcase: Check Out the Coolest Work from Tokyo 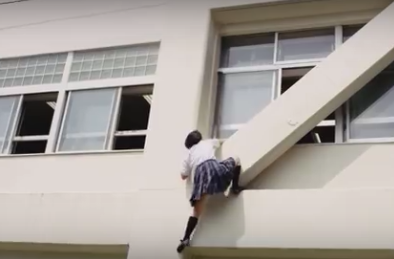 A typical looking Japanese high-school girl suddenly realises she is late for class and decides to take the fastest way up: climbing up the school’s building and into the classroom. The spot went viral on YouTube, attracting over two million hits since first airing in August 2015.

Saatchi & Saatchi Fallon Tokyo personify hard to remove grease in the form of macho bodybuilders in this hilarious spot to demonstrate Shark’s ability to get rid of unwanted grime build-up.

OK Go Promo – I Won't Let You Down

Damian Kulash, the man who put his band on some treadmills and made them dance in 2006, came back with another ambitious promo for OK Go. Devised by Japanese independent agency Mori Inc, the promo sees the band join a cast of hundreds to create a huge-scale choreography involving Honda's 'Unicub' motorised unicycles and umbrellas.

MetLife  – My Dearest Dad and Mom

Isobar Japan and Dentsu Tokyo teamed up to create a film with a simple but powerful insight: children have the power to help strengthen the bonds between couples. The candid family interviews question the roles within the families, and were shot by the couple's own children and played back to them in a special viewing, capturing some tear-jerking emotional responses from all.

Booking.com – Here’s to the Explorers

Accommodation site Booking.com kicked off its first-ever brand campaign in Japan, debuting wiht the TVC, “Here’s to the Explorers,” as a part of a new integrated brand campaign from Wieden+Kennedy Tokyo, its agency of record in Japan.

Following the launch of the Nike TV spot “Loop”, Wieden+Kennedy Tokyo launched the second beautifully shot “Shadow Class”. The film was directed by Eiji Tanigawa, one of the most recognised directors in Japan.

TOOT – ‘Keep It All Together’

TBWA\Hakuhodo Tokyo sees this campaign’s heroes playing golf in the most unlikely, extreme locations imaginable – such as sand dunes, off sheer cliffs, waterfalls, in deep forests, and amoungst ancient ruins and underground caves.

A charming story TBWA\Hakuhodo Tokyo of a young couple beginning to discover each other is cinematically shot in Hokkaido, is set in the far north of the country where the bitterly cold weather conditions fell to -25.

JINS – Life Is What You See

Tokyo-based eyewear brand JINS expanded into the U.S market with BASE Co. Ltd.’s campaign “Life is what you see”. The AOI Pro. inspirational piece is directed by Caviar director Bram Van Alphen and sees people tap into life’s most important moments.

Quiksilver Japan and TBWA\HAKUHODO launch of a revolutionary new product that enables Japan’s over-working businessmen to regain their work/surf balance. Japanese businessmen, known as ‘salary-men’, are notoriously over-working. As students with flexible schedules, they were able to enjoy surf time, but once their careers took off, they no longer had the time to hit the waves. ‘True Wetsuits’ are authentic, high quality wetsuits made by Quiksilver, which can also be worn as suits on business occasions. The concept, developed by TBWA\HAKUHODO, launched with the dedicated Quiksilver ‘True Wetsuits’ website and an online film that shows fans how they can fit surf time back into their busy lives.