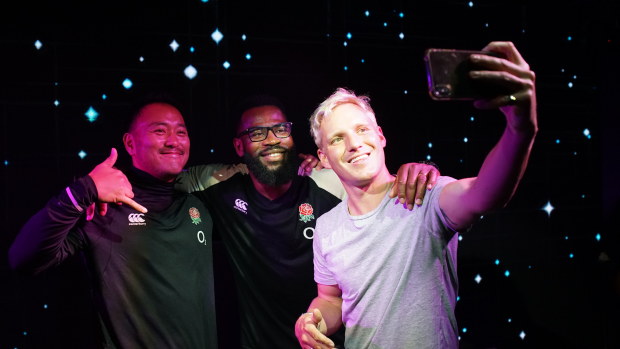 Ahead of a huge Autumn of rugby getting underway in Japan, ex-England and Lions international, Ugo Monye has been getting to know the country a little better along with his rugby mad mate, TV personality Jamie Laing.

The brand-new content series, O2 presents: Travel Fan in Japan, follows Jamie and Ugo as they embark on a journey across Japan visiting cities including Tokyo, Yokohama, Sapporo, Osaka and Kobe. With moments of hilarity along the way, ranging from the Made in Chelsea star taking a punishing from a sumo wrestler, taking on Japanese school kids in a game of O2 touch rugby and visiting a female samurai warrior, the two mates give an in-depth view into Japan in moments that are set to get the nation laughing.

Fans can even get a glimpse at ‘what might have been’ following Jamie’s withdrawal from 2019’s Strictly Come Dancing, as he showcases his impressive range of dance moves when he battles pal, Ugo, in a dance-off at a Japanese arcade, with Jamie naturally coming out on top.

Over the course of six episodes, the series discovers and highlights the power and influence of rugby in Japan and the unifying bushido values (samurai warrior code) that connect the country to the game. Kickstarted by a meeting with England Rugby Head Coach, Eddie Jones, each episode explores a key characteristic of what it means to be an international rugby player.

Jamie Laing, said: “I love rugby and I love travelling, so it was fantastic to head over to Japan and discover more about such a wonderful country that is enriched in culture. While Ugo and I had a lot of fun, it wasn’t all plain sailing and I definitely felt the full force of a Japanese sumo wrestler, although therapy at the cat café definitely helped me get over that”.

The series is released as part of O2’s new England Rugby campaign; ‘Be their armour’. The campaign is founded on the power of support, uniting fans and showing how their support can be England’s armour, helping to prepare the squad for success this Autumn.

The six part series can be watched here.