James Kibbey's 'The Last Sparks of Sundown' Premieres in the UK 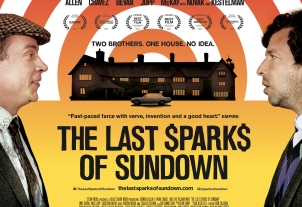 'The Last Sparks of Sundown' will premiere on 23rd July 2015 at the Regent Street Cinema and then play at the Prince Charles Cinema from Mon 27th July 2015. The film will be available on Amazon from Monday 3rd August.

'The Last Sparks of Sundown' is the debut feature film from UNIT9 Films director James Kibbey.

Following a busy start to the year for the director, working on commercial projects for Adidas, Havana Club and the hilarious mockumentary style film for Southampton Football team, 'The Last Sparks of Sundown' will finally launch in London cinemas later this month, with the film already garnering rave reviews.

Working with acclaimed producer Adam Dolman, the duo were inspired to make the film following the success of their short 'House Cocktail' which won the international House Shorts competition, judged by Hollywood royalty including Harvey Weinstein, Paul Haggis, Paul Greengrass and Jessica Chastain. The film has since won a further 6 awards across the globe and James came Runner­Up in the prestigious Cannes Young Director Award in 2013.

Knowing how long it takes to get a film made – and lacking the time and resource to dedicate to this – James and Adam decided to go it alone and make a movie in just one year. Taking a different approach the pair worked backwards, figuring out their production constraints first and then creating a plotline and script around these considerations.

And their indie approach is paying off as 'The Last Sparks of Sundown' has already won them Best Feature and Best Director at the Chicago Comedy Film Festival and a 3 star review from Empire magazine.

The film follows two down on their luck American brothers who travel to England to sell their late grandfather's country estate. A straightforward plan if it weren’t for the strangers in the house and the sinister man on their tail.

Starring award winning comedians Mark Chavez and Shenoah Allen (aka The Pajama Men) in their first film, as well as BAFTA winner Kayvan Novak (Facejacker, Four Lions), Miles Jupp (Rev, The Thick Of It), BAFTA Nominee Christian McKay (Me and Orson Welles, Rush), Emily Bevan (A Casual Vacancy, In The Flesh, The Thick Of It), and Olivier Award winner Sara Kestelman.

Michelle Craig, Creative Partner at UNIT9 Films, says “We’re extremely proud to collaborate with talent like James and Adam at UNIT9 Films. James has a unique flair for comedy and bringing out the best of talent. 'The Last Sparks of Sundown' is a wonderful example of what James and Adam are capable of producing and directing together. We’re excited to see what they will be working on next.”

'The Last Sparks of Sundown' will premiere on 23rd July 2015 at the Regent Street Cinema and then play at the Prince Charles Cinema from Mon 27th July 2015. The film will be available on Amazon from Monday 3rd August.

You can watch the trailer for the film HERE.

James Kibbey is a writer/director specialising in comedy and working with talent. He is represented commercially by UNIT9 Films and you can see more of his work HERE.