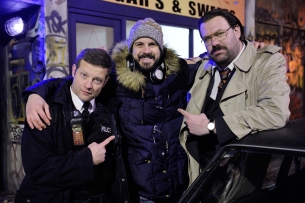 Another Film Company is pleased to announce the signing of director James De Frond.

James’ comedy pedigree is evident in the impressive list of TV series that he has directed or written, earning him several awards including a BAFTA nomination for Best Writing and Best Breakthrough Award at the British Comedy Awards.

His directing credits include Bo Selecta!, Keith Lemon’s Very Brilliant World Tour, The Morgana Show and Very Important People for Channel 4 and the new BBC3 series ‘ Murder in Successville’ a half scripted and half improvised film noir whodunnit. It’s a very fresh format and features a lot of celebrities including Dermot O’Leary and Deborah Meadan. The first episode airs tonight, May 6th

His commercial credits include O2, Hooch and paddy Power.