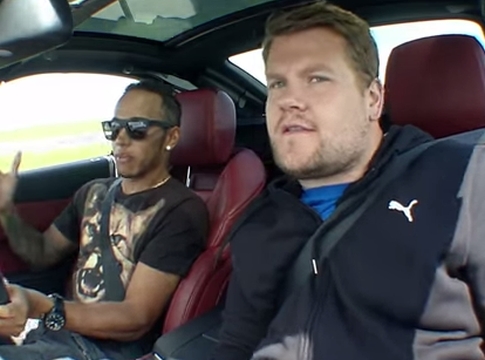 How many questions can Lewis Hamilton answer whilst driving one lap at full speed around a race track? British comedian James Corden attempted to find out and curb his fear from the passenger seat, as the MERCEDES AMG PETRONAS driver took a morning out from F1 before the summer break. Is there anything more exhilarating than F1, does he prefer Sebastian or Fernando, is it true he wears his helmet in bed are just some of the questions put to Lewis in the fastest interview he has ever done.

Lewis Hamilton said on the day, “I do so many media interviews as a part of my job but it was great fun to do it in a very different way. This interview was definitely one of a kind - James was firing out questions almost as fast as I was driving, so I tried to make it a bit challenging for him. He’s a really funny guy, I’d be more than happy to throw him around a passenger seat whenever he likes.”

After the interview, James Corden added with shaking knees, “If you think Lewis was driving fast, I can assure you, he was driving faster. This was undoubtedly the most unusual interview I have ever done, but it was for sure one of the most enjoyable. It was great to meet Lewis, he was a great sport and I honestly believe that deep down he wishes his girlfriend was hot like me!”

The unusually fast interview was released today by PUMA, as part of its Forever Faster brand campaign. PUMA is the official team partner of the MERCEDES AMG PETRONAS Formula One Team.