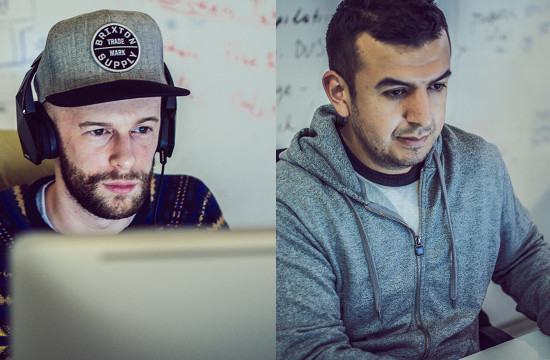 Toronto-based digital production and design company, Jam3, has brought on Isaac Garcia as Senior Interactive Designer and Adam Romano as Interactive Designer. The hires add to Jam3's award-winning creative team, best known for its experiential digital work across the advertising and entertainment industries.

Isaac brings 10 years experience in digital design and creative direction to Jam3. Most recently he was a Creative Lead at 2Advanced Studios, CA, leading creative and strategic direction on work for brands like Lexus, Disney and Toyota. Prior, Isaac was Associate Creative Director at Ignition Interactive, CA, leading a team of designers, illustrators and developers on projects across the entertainment industry.  He also spent 5 years at Ottawa-based Fuel Industries as an Art Director / Senior Designer, creating interactive experiences for top brands including: Kraft, HBO, Sony  and Dell.  Isaac's work has been honoured by Cannes, The FWA and the DMA, to name a few.  In his new role at Jam3, Isaac will oversee the shop's growing team of designers and will work across its full roster of clients.

Adam joins Jam3 from Toronto-based digital creative agency, Playground, where he was an Art Director working cross-discipline from strategy and concept to UX design and illustration.  Recent projects included the launch for extreme weather gear brand, Canada Goose as well as the new look for the grammys.ca website; and he also won Gold at the Canadian Online Publishing awards for best web design and a Silver for best mobile design for his work on the WNetwork. Prior to Playground, Adam held posts as a freelance Graphic Designer for Rightsleeve Marketing and as a Graphic Designer for Propeller Graphics and Advertising, both out of Toronto.