Jam3 Honours the Battle of Gallipoli with Interactive Documentary 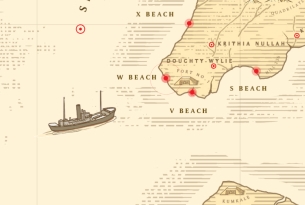 In honour of the 100th anniversary of the historic and disastrous Battle of Gallipoli, which lasted 9 months and saw over 500,000 casualties, Istanbul-based agency Modiki along with its client, Kale Group, pioneers of the ceramics industry in Turkey and an international leader in the space, scripted an interactive documentary called "Sons of Gallipoli". The film was commissioned by Modiki and Kale Group, both huge supporters of history and the arts in Turkey, and offers an emotional in-road into the battle through the point-of-view two modern day mothers, one from each side of the conflict, in an immersive interactive experience that conveys the great follies of war. Click here to experience the documentary.

Toronto based digital creative company, Jam3, was hired to bring the film to life online and enlisted Director Booker Sim to join them on a 3-month shoot to capture the stories of all the 'Sons of Gallipoli'--including relatives, locals, renowned historians, war buffs and even tour guides--still keeping the memories of the war alive 100 years later. Following their exploration and filming, Jam3 pieced the footage together to create a profoundly human experience online that goes against the grain of a typical war documentary, through stories, archival videos and photos, first-person accounts and handwritten notes of those who Gallipoli most affected.

While most interactive films cut away and interrupt the main story to jump into additional content, Sons of Gallipoli features a clever 'picture in picture' view that allows users to seamlessly explore through related photos and content while still following along with the documentary.  And while the Battle of Gallipoli holds the most historical significance to the people of Australia, New Zealand and Turkey - this film was crafted for large-scale international appeal. As such, Jam3 developed the experience in a way that users can enjoy the story for a few minutes or a few hours, either way building an emotional connection with the subjects who even a century later still struggle to understand the meaning of war.