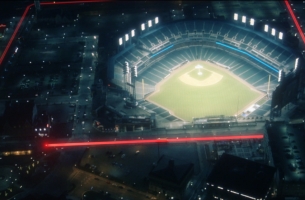 Gramercy Park Studios has worked on the launch film for Jaguar’s F-PACE, created by The Intro Partnership, which went live at the Detroit Motor Show last week. To celebrate 80 years of Jaguar, the promo was created to reveal the name of the brand’s new family sports car.

Head of Sound Toby Griffin created the audio for the promo which reveals Jaguar’s all new performance crossover.

Toby comments: “The audio is driven by the music track and enhanced by sound design which follows trails of light through Detroit city. Several key moments are emphasised with spot effects. I created a rising tone that builds the tension towards the reveal of the vehicle’s name, spelt out across the city. The combination of stunning visuals, high energy music and big sound design create an impactful promo, without revealing the cars' design.”

Set across the night-time cityscape of Detroit, the promo depicts the F-PACE’s trail through the urban landscape. The car’s appearance remains a mystery, as light beams track the car’s path through Detroit whilst the accompanying audio ramps up the tension. A final over-head shot reveals how these light beams spell out the new sports car’s moniker.

Toby adds: “I have a long standing relationship with director Julian Gibbs (The Intro Partnership) ever since we worked on the BBC's Formula One Season opener in 2009, which won several awards including Best Sound Design at Promax UK.”

Speaking in Detroit, Andy Goss, Jaguar Land Rover Global Sales Director said: "In 2015 we will celebrate Jaguar's 80th year. We have started it by announcing our first performance crossover which we consider to be the ultimate practical sports car - a car that builds on the marque's founding ideals of Grace, Pace and Space to become one of the most innovative Jaguars we've ever developed. The F-PACE has now begun its engineering and development testing programme ahead of the new model going on sale in 2016."

The Jaguar F-PACE is a highly-efficient five-seat performance crossover, underpinned by Jaguar’s innovative aluminium-intensive architecture and advanced suspension system, and will deliver an unrivalled blend of performance, style and practicality.