Jafri: How Director Michael Beets Brought a Melbourne Local Legend to the World with VR

Behind the Work 457 Add to collection 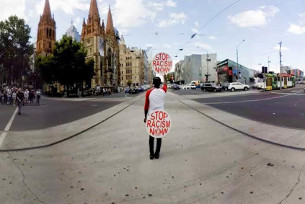 Every town has that person, that local character who everyone loves – but no one is quite like Jafri Katagar. Jafri arrived in Australia as a refugee and now spends his Friday afternoons on the streets of Melbourne, sharing his anti-racism message. Director Michael Beets was intrigued by this lone, determined figure and wanted to delve behind the ‘character’ and learn about the real person.

At first he figured that he would make a documentary… but then he realised… what better way to transport an audience inside Jafri’s world than to use virtual reality?

It’s a thought that’s had real resonance and gone far beyond Melbourne, or even Australia. The film was picked up by Toronto Film Festival – one of just five VR experiences selected for the show, and one of just a handful of Australian films to make it into the prestigious event. It turns out this local hero has global appeal.

The VR experience was the first project to emerge from PLaTO Reality, a new VR partnership from OTTO Empire (which also represents Michael as a director), and it was produced with Visual Playground. LBB’s Laura Swinton caught up with Michael to talk about this intimate portrait of the Melbournian legend.

LBB> What was the catalyst for making Jafri?

MB> I came across Jafri the same way everybody else does, waiting to cross Flinders Street. You could feel this effect he was having on people. Everybody seemed to be having these various reactions and I found that fascinating. When the light turned green, and we all crossed as a group, a bunch of people went up to him and hugged him. It was quite moving, and I immediately wanted to talk to him and find out who he is when the signs are put away.

LBB> And what was it about Jafri’s story that made it a perfect candidate for VR storytelling? And can you tell non-Melbournians who Jafri is and why he’s such a local character?

MB> Jafri stands every Friday afternoon in the middle of the road in Melbourne’s busiest intersection. He stands silently, holding a large circular sign that says 'Stop Racism Now'.

Originally, 'Jafri' was a short film documentary, but after our initial interviews, it began to feel a bit forced. I wasn't interested in making an activist piece and ultimately I wanted to give the audience the opportunity to come across Jafri in the same way in which I did, at the corner, waiting to cross, which is what the power of VR has to offer.

LBB> What kind of constraints did 360 shooting present in terms of the practicalities of working with Jafri and the rest of the crew?

MB> To be honest, I found it liberating. Virtual reality isn't film, so as soon as I began to think in terms of 'spatial' storytelling, the opportunities began to present themselves. An opportunity to allow the audience to feel a sense of presence and intimacy with Jafri is something that really stood out with this medium.

LBB> I know when you went to university you started off studying theatre and then switched to film – what’s it been like to bring these two forms together in 360?

MB> The audience is 'inside' the story with virtual reality, their eyes are the camera, and they get to choose to look at whatever they find interesting. Which means in a 360 degree space, you have no control, so I find myself falling on traditional theatre 'rules' to assist with this idea of guiding an audience inside the experience. I find film has helped mostly from a technical point of view when dealing with cameras and software, and also the post flow, which is quite similar.

LBB> And what did Jafri himself make of being filmed in 360?

MB> I don't believe Jafri fully understood, until he saw himself in the experience, which must have been strange. But this is true for everybody who hasn't tried VR. You can only really get a sense of it, and the power of it, when you experience it. I'd go as far as pleading with those interested, to make sure they view something that has been created specifically for VR on a decent headset. We are at a time where first impressions can make or break people's first impressions of it. 'Notes on Blindness', 'Clouds of Sidra', and 'Invasion' are great entry points to see the possibilities.

LBB> The story is about someone who is a real character in Melbourne, but it’s been well received internationally and picked up for Toronto Film Festival – why do you think it has chimed with international audiences?

MB> Although this story is more about Jafri than his campaign, the image of him standing in the middle of Flinders station with his 'Stop Racism Now' signs is such a powerful symbol in the experience, that it inevitably becomes a bi-product of the film. Everywhere in the world we are dealing with this message, and I believe it resonates with an audience in Toronto in the same way as those who are waiting to cross the street at Flinders Station.

LBB> And what do you think that it means for VR/360 filmmaking for a project like Jafri to be accepted into a major film festival?

MB> It shows promise. Venice, Sundance, Tribeca, TIFF, MIFF, they have all invested in introducing VR to their audiences. More importantly, I think it shows that the experience itself is meaningful, and there is a justification for the form and its impact.

LBB> Did you have the opportunity to go to Toronto for the festival? If so, what was that like?

MB> I did. The screenings were exciting and it was great to see the audience's engagement and, more importantly, that there is an audience for it. It was fascinating to see industry leaders from all over the world gather in one place to discuss the state of virtual reality, and where it's headed... and the parties.

LBB> How do you think virtual reality or 360 will transform the concept of documentary? Documentary is an interesting form of film because while it’s about a ‘true’ story, it's often a heavily constructed and narrowly focused version of ‘the truth’. Does 360 leave filmmakers with fewer places to hide in that regard?

MB> As viewers we hope that we are getting a balanced point of view but at the end of the day, the director has 'constructed' the world in which the viewer is placed. They have chosen the location, what subjects to film, and where to place the viewer in the space. As an experience it certainly feels as if the director is less involved, or invisible, because the viewer becomes a sort of director themselves in the way that they can choose what to look at. It's kind of like being in the Truman show, and the viewer is Jim Carrey.

LBB> The film was the launch project for PLaTO Reality, a specialist VR studio from Otto Empire. Do you have any more VR/360 projects lined up? And what do you think the appetite for VR is like in Australia among agencies/brands and ordinary film goers?

MB> Yup, we are working on a project right now, which we are super excited about. It's going to be a much more experiential narrative with moments of interactivity but that's pretty much all I can say now.

In terms of agencies and brands it's a bit of a waiting game. The majority are super excited about the potential and can't wait to dip their feet in, but I suppose it comes down to their clients and justifying it as an experience. In Australia, we haven't seen anything that has gone beyond a viral activation, but that also comes down to the fact that Australians haven't begun to adopt the technology, but with that said, it's the same everywhere in the world.