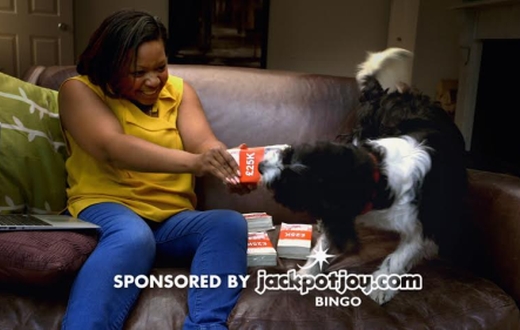 Jackpotjoy.com Online Bingo, owned by Gamesys, is sponsoring Channel 4’s Million Pound Drop series this summer, with TV idents that promote the gaming website’s huge jackpots in an entertaining way. The deal was brokered by Maxus Partnerships, with media planning and buying from Maxus and production through Sassy Films.

Association with Channel 4’s popular Million Pound Drop complements Jackpotjoy.com’s values of fun and entertainment as well as its promise of huge jackpots. The series has been revived in a new timeslot and will run one episode per week starting this Friday, giving the brand a regular peak Friday night presence. Moreover most game play occurs on Friday nights meaning the tie-up targets players when they are most receptive.

The sponsorship kicks off on Friday 11 July from 8pm for a series of eight episodes with TV ad break idents. They feature a woman at home on her sofa with her pet dog in various poses – watching TV, the dog on its own with a laptop or jumping onto the sofa – and to their joy, wads of cash ‘dropping’ in on them.

The sponsorship targets women aged between 35-54, along with anyone who enjoys online gaming, particularly Bingo, and a hunger for frequent and sizeable jackpots. The sponsorship will support the brand over the summer months leading up to the autumn where more traditional marketing and TV spot advertising activity is low.

Paul Troy, global brand director, Gamesys  said: “We approached Maxus for recommendations to support Jackpotjoy Online Bingo with a summer campaign that fits with the brand’s values of fun and entertainment, along with the huge jackpots to be won. Maxus identified a popular programme partner that not only complements the brand’s message, but also targets our audience at the time when they are most likely to be playing or thinking about playing.”

Andy Benningfield, client services director, Maxus, said: “Gamesys wanted to build on Jackpotjoy’s entertainment credentials and increase the perception that it’s the place to win large jackpots. Channel 4’s Million Pound Drop is a great fit for Jackpotjoy Online Bingo in terms of its audience and the programme’s thrilling and entertaining content, as well as its scheduling – Friday nights are the most popular for online game play.”