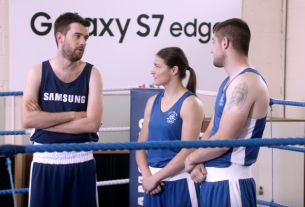 Samsung Electronics, Worldwide Olympic Partner in the Wireless Communications Equipment category and Official Team GB Partner, has today unveiled its School of Rio Olympic and Paralympic Games campaign in the UK. The campaign, which premiered last night with a 90 second TVC during the finale of the Tour de France, is designed to enhance the nation’s knowledge and enjoyment of Olympic and Paralympic events, with help from comedian Jack Whitehall.

Following the success of Samsung School of Rugby, Jack will once again spend the summer being schooled by sporting heroes. Olympic and Paralympic Games legends and Rio 2016 competitors including cyclist Sir Bradley Wiggins, rowing gold medallist Helen Glover and Paralympian champion swimmer Ellie Simmonds put Jack through his paces as they tutor him in the core elements of their sports.

Scripted in partnership with Jack, the campaign content is themed around durability, elegance and stamina; key features of the new Samsung Galaxy S7 and S7 Edge smartphones.

Russell Taylor, Chief Marketing Officer, Samsung Electronics UK & Ireland, commented: “The Samsung School of Rio campaign will tap into the mood of the nation during the biggest sporting event in the world. We know how passionate British and Irish fans are during the Olympic and Paralympic Games and we want to bring fans closer to sport in an authentic, credible and imaginative way. A central brand belief for Samsung is that meaningful progress comes from daring to defy barriers and this is evident in the initiatives that are running across the globe to support Samsung’s Official Partnership with the Olympic and Paralympic Games - we are shining a light on athletes around the world who push the limits of what is possible. We are delighted to have some of the world’s best athletes helping Jack during the campaign.”

The multi-platform campaign is led by five hero films which will be used across media channels and supported through retail, digital and social activations. Additional content will include 360-degree virtual reality live interviews with athletes from Team GB’s base in Rio de Janeiro.

Commenting on the campaign, Jack Whitehall said: "The Olympic Games are the ultimate sporting event, bringing together the best athletes in the world and Sir Steve Redgrave to compete for medals. However, many fans don’t know the ins and outs of each event. I’d like to think that watching these films will equip the British public with the knowledge they need to enjoy the Games…and hopefully they won’t be too distracted by my athletic physique in a pair of swimming trunks.”

Olympic Legend Sir Bradley Wiggins added: “I’d love to say Jack was a model pupil and a natural out on the track, but well, he did his best. I thought at one stage we might have needed a pair of stabilisers to get him going but with a bit of coaching we eventually had him up and running. We had a great time filming and I think the public will really enjoy watching the film too, as well as hopefully learn a bit about the intricacies of our sport.”