The first film of the series released this week 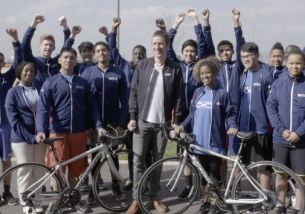 Global brand experience agency, Jack Morton Worldwide has been appointed by Prudential to create a series of films for Prudential RideLondon, 2016, following a competitive pitch. The first film of the series is released this week.

Staged for the first time in August 2013, Prudential RideLondon is the largest festival of cycling in the world, with 100,000 participants expected to cycle more than three million miles during the weekend of 30-31 July 2016.

This year, Prudential plans to highlight charity and community engagement in the two sportive rides on Sunday 31 July. Prudential will be working with three charitable partners, Teach First, Greenhouse Sports and the Invictus Games Foundation. The charities will provide opportunities for young people from disadvantaged communities and wounded and injured service personnel to take on the challenge of riding either 46 or 100 miles for the first time.

As part of this focus, Jack Morton has been appointed to create a series of films capturing the charities’ journeys towards the event. The films will be shared by Prudential, RideLondon and the three charities on official websites and social media channels.

The first film, released this week, introduces the charities and follows them as their teams begin their journey. The film also features cycling legend Sir Bradley Wiggins supporting the riders. Further films will be released in the coming months, with a final wrap up film being aired after the ride.

Mike Kunheim, Managing Director, Jack Morton Worldwide said: “Prudential RideLondon is the world’s greatest festival of cycling and an extraordinary experience for all who take part. So, we’re delighted to have the opportunity to help Prudential and its charity partners tell these very personal and moving real-life stories and engage further with the community.”