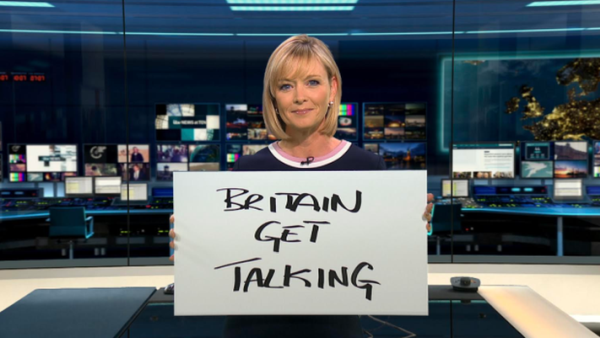 Uncommon continue a thread of modern and provocative marketing for ITV, in new work ‘Britain Get Talking’. The powerful mental wellness initiative puts social purpose at the heart of the channel, leveraging ITV’s ability to shape British culture. Uncommon’s thinking to pause ITV’s most iconic shows aims to provoke important conversations across the nation to improve mental wellbeing.

The campaign isn’t launched as you might expect in a traditional TV advert, but instead by surprising viewers with interrupting the final of one of Britain’s most popular family shows; ‘Britain’s Got Talent: The Champions’. During Saturday night’s final, hosts Ant and Dec suddenly call a halt to proceedings, addressing the audience and viewers at home to turn their attention away from the acts competing for the BGT crown, to focus instead on one another and let mental wellness take centre stage.

Ant and Dec launch ‘Britain Get Talking’ with the shocking message that ‘Anxiety and depression in children has risen by 48% since 2004. They emphasise that something as simple as talking together and listening to each other can build everyone’s mental wellness. Ant and Dec give the nation a chance to put this action in to practice, pausing the entire show to get people reconnecting in their living rooms.

We see the famously outspoken judges (Simon Cowell, Amanda Holden, Alesha Dixon and David Walliams) fall silent, the applauding audience stop dead in their tracks and the backstage crew are brought to standstill holding placards which state ‘Use our silence to talk to each other.’ The power of the silence hits hard contrasting with the usual hustle and bustle of this highly animated show aiming to provoke the audience at home to talk to one another.

The silence doesn’t stop here. The following commercial break continues this theme, kicking off with hero film ‘Tune Back In’, created by Uncommon. It features a wide cast across ITV’s most well-known shows, from Soaps and Daytime to Entertainment, Factual and Sport. We see the talent on screen not making any sound or movement, frozen still in their normal ITV setting. The viewer is invited to follow a written script which is cleverly immersed into iconic ITV scenes. Talent includes: Dermot O’Leary, This Morning’s Phillip and Holly, Alex Beresford, Brenda Blethyn, stars from Corrie Alexandra Mardell and Emmerdale’s Emma Atkins, Jonathan Ross, Maggie Alphonsi MBE and Gordon Ramsay, Gino D’Acampo and Fred Sirieix.

The silent takeover continues with ads from Dunelm, Oral-B, Gillette, SEAT and Network Rail – all of which are using their media to raise attention to this important cause. All films were directed by Nez through Pulse Films.

As part of ITV’s commitment to promoting this message, over the next month, we’ll see ‘Britain Get Talking’ ads hijack the entire channel, featuring familiar ITV faces using their silence to encourage viewers to catch up at home, and tune back in to their family’s story. The campaign will include promos, radio, break bumpers, website content and print. The campaign will also feature specific creative on TV and social in the run up to World Mental Health Day on Thursday 10th October.

Carolyn McCall, ITV chief executive, said: “ITV brings people together for unmissable shared viewing moments. By disrupting one of our biggest shows this Saturday night, we want to reach a wide family audience and create the space to start a national conversation about mental wellness. At the heart of ITV’s social purpose strategy is this new five year commitment to help make mental wellness a priority in all our lives. We've worked with our long-term strategic partner, Mind, as well as Young Minds to develop Britain Get Talking. The campaign highlights the importance of talking and listening in building mental wellness, ensuring we make looking after our mental health as much of a part of our daily lives and culture as our physical health."

Lucy Jameson, co-founder, Uncommon, added: “ITV is a brand that matters. It is a positive and powerful voice in British culture. We wanted to focus that power on mental health and, in particular, the mental wellbeing of our children. All the statistics say there’s a rising problem amongst today’s kids, with people spending more time than ever ‘together alone’. We wanted to make something that went beyond advertising. Changing programming. Involving talent across the whole channel. And even pausing its most iconic shows to provoke important conversations across the nation, that’s what ‘More than TV’ is all about.”

‘Britain Get Talking’ is supported by mental health charities Mind and YoungMinds. It is the first stage of a five-year commitment from ITV to promote mental wellness. ITV has set a goal of getting 10 million people to take action to improve their mental or physical health by 2023.

In support of the campaign, a ‘Britain Get Talking’ website is now live online - itv.com/britaingettalking. Viewers will be signposted there for further information on the campaign and useful resources made in collaboration with Mind and YoungMinds.

Post-production and VFX: Jon Hollis at Raised By Wolves