It’s Time to Take Care of Your Own Brand

The Influencers 521 Add to collection 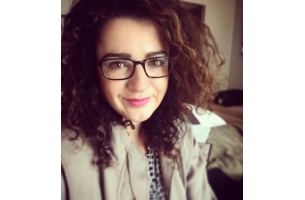 You’re not going to be read about, if you’re not written about.

It sounds pretty obvious, but you might be surprised at how often I hear people talk about PR like it’s just luck or magic. As though producing good work or achieving business goals, will automatically result in press.

Sadly, as across all aspects of life, we don’t all get the recognition we deserve (just ask your parents).

Guaranteed coverage might have been possible at a time when there were less brands, less agencies, less mediums and certainly less channels. But today the market is saturated and the bar is set immensely high.

At Little Black Book alone, we get hundreds of press releases sent to the editorial team each week. While our members can have their work uploaded immediately (the site is partly populated by user-generated content), those approved and shared via the editorial team are a small proportion of the many submitted.

But they have an infinitely better chance than the releases never written. 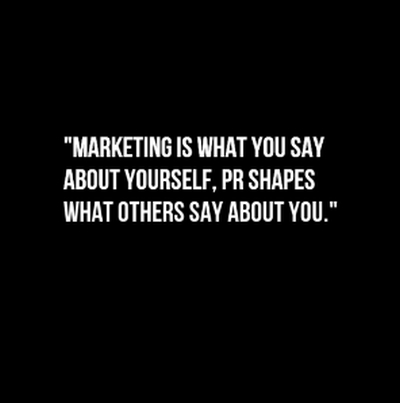 I regularly meet with companies that have never tackled PR before. Perhaps it is our Britishism but, unlike our North American counterparts, we’re not good at talking about our own achievements. And that’s OK – unless it also means that you’re not talking about your company’s achievements.

For some it’s a dirty word, but I suspect for the majority – PR is simply misunderstood. Although PR and marketing work best when developed together, they are not the same thing.

So as much as you might market yourself as a particular type of company or brand – by using PR, you influence how others perceive you, which can have a huge impact on your revenue. For a production company that might be the difference between being pigeon-holed with only automotive work, and getting the opportunity to pitch for a wider variety of brands.

The reasons for which we are approached by our members to help them with their PR are, for the most-part, strikingly familiar.  They are seeing other competitor companies getting press, they have seen their own work in the press without being credited, they want to change the perception of their offering, they can’t just rely on repeat business, and ultimately – they want more revenue.

Their reasons for not having invested in PR before are also the same; they are time-poor, they don’t know where to start, they don’t know what on earth they could talk about, and the last thing they want to do is pour money down the drain by paying a retainer and not making the most of it. 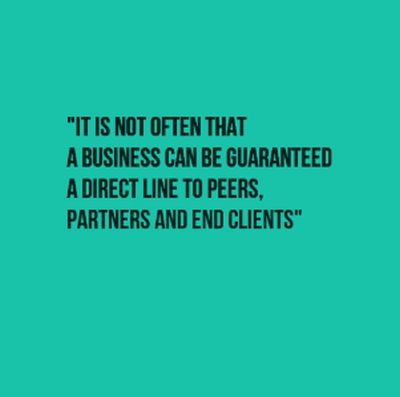 Of course, for the time poor, enlisting someone to help is the first step to taking this off their plate. And not all PR is retainer based or unaffordable.  You can achieve a lot with a modest budget, particularly if you enlist the right help and think about how to best reach your target audience.

But it is with frustrating frequency that we hear our clients say they don’t know what they could possibly talk about. For starters – they are so busy working, there is almost always some interesting projects that we can PR. But when we dig a little deeper, we are finding some of the most interesting stories that we know would be widely read and shared.

We understand that PR can seem like a big hurdle, especially if it is something you’ve never attempted before and you don’t know where to start. 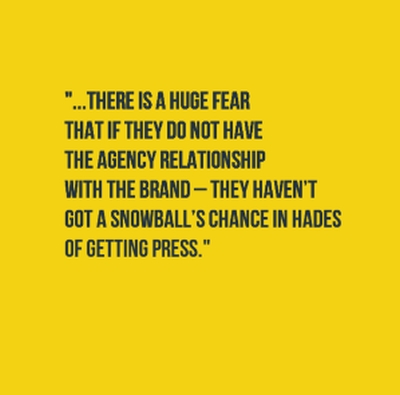 For agencies, it is admittedly easier to tackle. Many have in-house PR or communications teams that we work with closely to build a strategy and PR plan, and we help local offices of some of the largest agency networks reach an English-speaking global audience.

But for the rest of the advertising-food-chain, there is a huge (and legitimate) fear that if they do not have the agency relationship with the brand – they haven’t got a snowball’s chance in Hades of getting press.

Of course each case is different, but for the most part there is always a way to talk about these achievements. For many production companies, post-houses, and music and sound companies, there is a good working relationship with the agency and when approached early enough (timing is everything) they can sound out potential PR with the client. Sometimes it can be resolved by releasing after an embargo or an exclusive, or taking a completely different angle in a separate press-release.

We did this recently for a production company that were not permitted to talk about the work on the day it was released, by either the agency or the brand who had both secured press exclusives. So instead we tackled it from a completely different angle ‘behind the scenes’, and made the piece far more exciting by including previously unseen footage and inside stories.

Where there is a conflict or concern this open dialogue is at the very least a great inroad to a joint release, with credits and quotes that would not have otherwise been included.

For more difficult relationships, we shift focus away from the ‘usual’ press-release and look to the people, the skills and methodologies. We develop narratives and thought pieces that speak to the processes that differentiate their offering, the talent that sets them apart, and the ethos that drives them each day.

An opinion piece might sound a little fluffy but it’s actually anything but. It is a unique insight into the heart of the business and a way for brands, agencies, companies and their talent to tell a huge global audience – ‘this is what we believe in and this is what we create’.

It is not often that a business can be guaranteed a direct line to peers, partners and end clients.

We’re all busy and PR might seem like an unnecessary luxury right now. But rather than being one of the many companies that come to us because they see their competitors getting great coverage, and great work, be that company – and get that coverage first.

When it impacts on your bottom line, can you afford not to?

Rachael Delahunty is Head of Communications and LBB/Lab at Little Black Book. 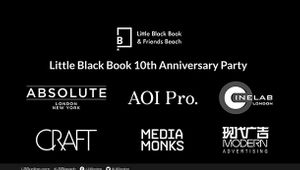 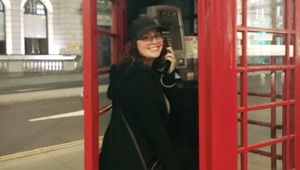 Real-Deal PR: Things You Can’t Learn in a Lecture Hall 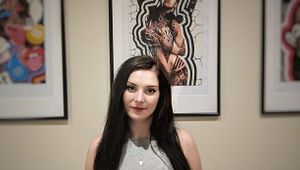 If an Ad Airs and No One Knows You Worked on It, Does It Make A Sound? 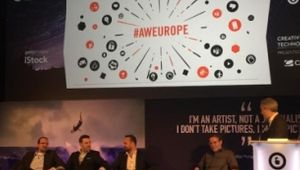 AI to Ad Blocking: Are Robots the Future?
View all News