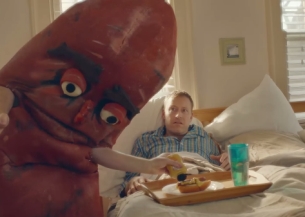 A few weeks ago, Johnsonville Sausage launched its first brand platform, “We don’t make sausage. We make family. And sausage.” with four witty TV spots. The new campaign demonstrates that for Johnsonville, it's the times we come together that make strangers into friends, friends into family and family even 'family-er'—and nothing brings folks together like Johnsonville Sausage.

And speaking of family, Johnsonville and Droga5 are making dads’ dreams come true this Father’s Day with their latest activation: Bratfast In Bed.

Launched on June 8, this new activation takes a twist on Father’s Day by encouraging families to wake Dad up with a juicy, sizzling brat, then tweet @Johnsonville or post a picture on Johnsonville’s Facebook wall to ignite a new Father’s Day tradition, using #BratfastInBed. To further explain “Bratfast in Bed,” check out this surreal, hilarious film here.

All year, Dad has been providing and caring for his family while awaiting the day that celebrates his efforts. So this year, Johnsonville is asking folks to skip the omelets and toolkits and thank Dad by giving him what he really wants: “Bratfast in Bed.”