“It’s Not a Gender Issue, It’s a Business Issue”

Trends and Insight 248 Add to collection 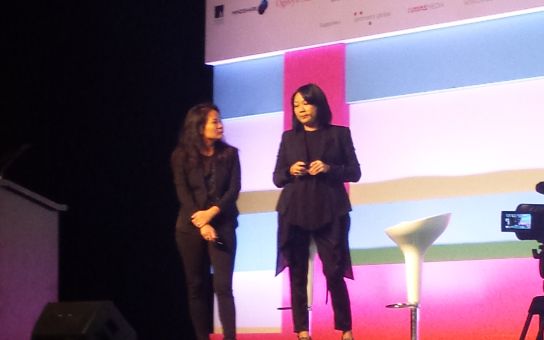 For a future-facing industry with one eye trained on tomorrow, advertising can be a terribly backwards place when it comes to women. Today at Spikes JWT’s Singapore CCO Valerie Cheng and Beijing CCO Polly Chu challenged the audience to take real, tangible steps towards addressing an outrageous gender imbalance that still sees only 3 per cent of creative director roles occupied by women.

Rather than delve into gender differences and ‘Men are from Mars, Women are from Venus’ psychobabble, the pair took a refreshingly positive approach to one of the industry’s most persistent problems. They argued that women in Asia are increasingly taking charge of most big family purchasing decisions and that female creatives are perhaps better positioned to come up with certain insights based on their shared experiences with the increasingly powerful base of buyers.

“You don’t want to go into an area where you’re saying ‘men can’t do this’. There’s no science to prove if men or women are more creative, so you want to stay away from that. But there is an argument that us [women] being there would get to where you need to be more quickly,” said Valerie Cheng, talking to LBB after the seminar.

In order to prove their point, the duo showed the audience four great pieces of work from female-led teams, three of which were aimed at women (BBDO Guerrero’s Whip It for Pantene, Wieden + Kennedy’s ‘Toughest Moms’ for P&G and P&G’s #LikeAGirl from Leo Burnett) and one aimed at an more mixed audience (Ogilvy Taiwan’s Dream Rangers). What’s more, says Valerie, they were keen to avoid including any JWT work in the presentation to avoid the issue being lost in a tawdry sales pitch and to make sure the audience’s focus was on the issue at hand.

“One of the things we consciously did was not show JWT work. It’sjust an observation where you go to every conference and everybody is trying to flog their agency. Stop it. People won’t take you seriously. It looks like you’re trying to hard to use this as a marketing platform. So I wanted to say something more genuine and use whichever work makes the point,” said Valerie.

On stage, the pair argued that better, more diverse mix of voices in creative leadership would be just as beneficial for men as for women.

One thing they were keen to avoid was for the talk to result in yet another ‘all words, no action’ soap box, and so they left the audience with several calls to action. On a structural level, they said, organisations need to implement a more conducive and supportive environment for female creatives and on an individual level, people need to take responsibility for mentoring and reaching out to women.

After the seminar, Valerie confided that she believed the key to solving the problem would probably lie with individuals, who can change their mind set and behaviour more quickly than unwieldy companies.

“Unless the organisation takes action to implement a more conducive environment, then that will affect everyone, including men. Everybody needs a balanced life. If you do that consciously then women don’t feel like they’re making such a massive sacrifice,” she said. “There are some particular actions that we hope that agencies will implement but there are some things we need to do as individuals. As a woman if we make a conscious effort to eyeball another woman in the organisation and groom her, it’s probably going to happen faster than waiting for an organisation to implement something. We need to keep reminding ourselves to extend a helping hand.”

On one level, Cheng also feels that the industry’s enthusiasm for talking about encouraging female creative talent and it’s reluctance to put any real changes into effect mirrors its sluggishness in other areas too. “With everything in the industry, from integration and digital, I feel if we just talk about it it’s not going to happen,” she said.

The pair rounded off their talk by announcing JWT’s new Helen Lansdowne Resor scholarship to help female students aspiring to be the adland leaders of tomorrow. Regarded as the first female copywriter, Helen Lansdowne Resor joined J. Walter Thompson in the early 20th century, broke barriers and turned the agency into a place that was known for encouraging female talent at the time.