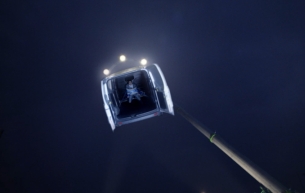 The idea was to advertise features in the Ford Transit range that some may consider mundane, but to do it in an exciting and shareable way. The scripts could have been done with heavy use of post effects, but the Creative Peter Hvid and Kit were both adamant that they had to be done for real to make the spots engaging. So a few calls to JCB, stunt coordinators, crane hire companies and a lion tamer later and they were set for the shoots.

The production took five days to shoot the four different films in multiple locations in the thick of winter with limited light. Several specialist rigs were constructed; rotator cuffs fitted, suspended lighting rigs and lots of safety wire work were called for as 3 of the 4 spots used actors with no stunt training whatsoever.

Kit’s Top Gear experience with shooting specialist car stunts came to the fore in this challenging project, with diverse thinking and efficiency a must, married with the immense experience of Fred Robinson and the team from Annex Films. The spots were lensed by Gary Shaw (Moon, ill Manors, Fortitude).

“I love working on online content, the budgets have just about caught up to the ideas and the creative is so much more interesting; we are making films that people might actually want to watch. These films are a prime example of this, they are a bit silly and lots of fun ­ what’s not to like! It’s still evolving but it’s an exciting time to be working.”

Kit is represented by Lynch-Robinson films in the UK, collaborating with Annex Films and others on a project by project basis. 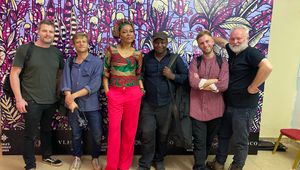