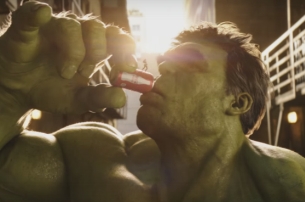 Last week, Coca-Cola showcased its smallest package on America’s biggest stage. In a 60-second spot titled 'Coke Mini', which debuted during the second quarter of the Big Game, two Marvel superheroes – the larger-than-life Incredible Hulk and the tiny-yet-mighty Ant-Man – clash in a quest for the icy-cold refreshment of a Coca-Cola Mini Can. Ant-Man, voiced by actor Paul Rudd, is caught snatching the last Coca-Cola Mini Can from the fridge in Dr. Bruce Banner’s lab. An angry Dr. Banner turns into the Hulk and pursues Ant-Man throughout the city. Cornered in an alley after a high-energy chase, Ant-Man surrenders and helps Hulk, whose fingers are too big to open the Coca-Cola Mini Can. Both savor the prize.

“The point of this spot is to not only remind people how much they love Coca-Cola… it’s to hero the Coca-Cola Mini Can,” said Andy McMillin, SVP, Coca-Cola Trademark, Coca-Cola North America. “We wanted to use the Big Game stage to celebrate our smallest package, which is key to our 2016 business strategy and a pack size people love.”