It's Dogs Vs Babies in Big Lots' Ultimate Battle for Cuteness 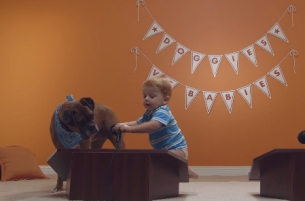 GO director Charles Jensen sends the adorable meter through the roof as babies and doggies compete in “A Battle for Ultimate Cuteness” in the new web campaign for Big Lots out of OKRP.

The campaign features six short videos that show sweetly cooing infants and charmingly drooling canines battling it out for cute bragging rights in competitions of Debate, Telemarketing, Music Composition, Geography, Chess and Data Entry. While both teams prove utterly useless at the competitions at hand, the high level of cuteness in their feats is irrefutable.  Between one of the tykes giggling over a simple telephone and one of the pups eagerly licking a baby’s face—the winner is up in the air.