It's Bus Vs Rally Car in Rothco's 'Mad Dash' Through Dublin 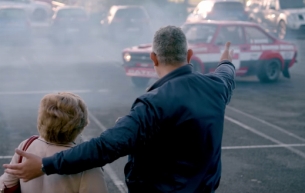 Creative Agency Rothco and Dublin Bus have teamed up with mother–son duo, Baz and Nancy from hit Sky TV show ‘50 Ways To Kill Your Mammy’, in a new campaign to give customers a behind-the-scenes look at the people in Dublin Bus’s Central Control Centre.

In the online film, ‘The Mad Dash’, which launches today, mischievously likeable son Baz gives his long suffering 70-year-old mother a shock by arranging for a rally car to take them across the city. Not up for being thrown around in the fast vehicle, she opts to take the bus instead, only to be challenged to a mad dash home. Whilst a frustrated Baz struggles with the heavy Dublin traffic, Nancy’s progress is aided and abetted by a tightly co-ordinated team at Dublin Bus Central Control.

John McMahon, Senior Copywriter for Rothco comments: “Customers can be unforgiving when it comes to travel disruptions. This campaign aims to educate the public about the people and technology behind Central Control, the nerve centre of Dublin Bus’s day-to-day operations. It has been built on the insight that a seamless journey is all that Dublin Bus users need so that they can get where they want to go, when they want to be there without even having to think about it.”

The integrated marketing campaign also includes a second film which shows Nancy and Baz being introduced to the Central Control team in person. In this film, we get an exclusive glimpse behind-the-scenes at Central Control, and learn more about the lively characters and the cutting-edge technology that keep the city’s buses moving as swiftly and smoothly as possible every single day.

The online films are also supported by a wider campaign which includes outdoor, social and digital display.