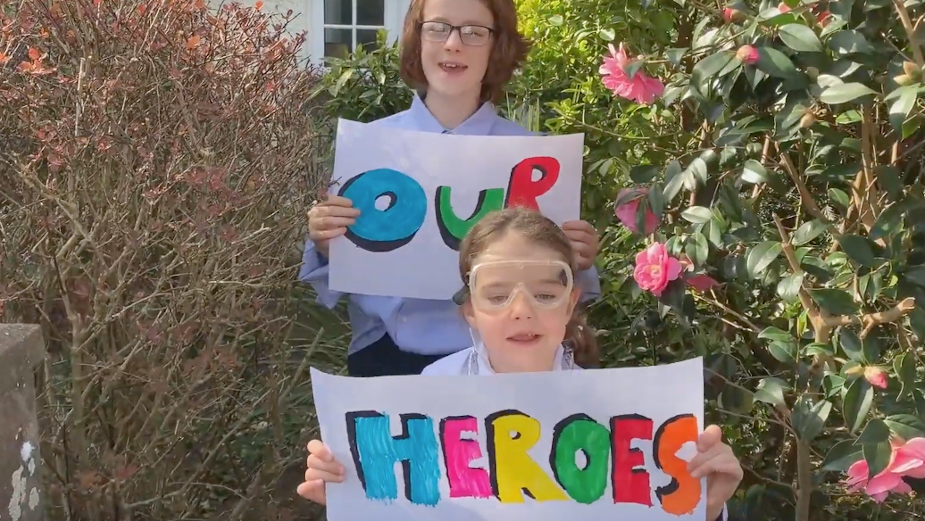 Industry leaders came together last week, to create a film showing gratitude for the NHS, aiming to celebrate their efforts, encourage people to stay in doors and donate to the cause.

Executive producers Ollie and Anna Allgrove comment: ’We really wanted to do something to give back and say thank you to the NHS workers who are putting themselves in harms way to help us all during this challenging time. We are fortunate enough to work with some incredible talent and were blown away with the way people jumped at the chance to get involved and the amount of time and experience they brought to the table. It just shows you what’s possible when we collaborate. We gave ourselves the tight turnaround of getting the film out before this week’s 8pm applause. The idea was conceived at 7pm on a Weds and by Monday a.m we had the rough cut.’

The Allgroves reached out to Mark Jermin Management and Stage and Screen, who were ‘absolutely integral to the project and without whom we could never achieve the film that we did.  The kids casting agency and stage school have a network of children across the country and their knowledge of each child and family meant they could work quickly to secure the footage that the film needed. We’ve long been impressed with both companies but they took our little idea and made it even better than we could have imagined, with each family going way above and beyond to create costumes, posters etc. The Mark Jermin Management and Stage and Screen network are simply amazing.’

‘The thing with founders Mark Jermin and Stuart Piper is not only their endless passion and experience but they have this ability to take a brief and then absolutely smash it. The whole team went above and beyond to not only mobilise their network of kids and their families but they were also integral to the creative process and brought a huge amount to the table in terms of creative casting suggestions, management of the process and how far we could take the film. This was very much a co-production with them. I just wish we could have used all the brilliant content we got in! The turnaround time between sending out the brief and then getting huge amounts of content back was mind-blowing and just demonstrates how good they are at what they do.’

Stuart Piper adds: "To the parents and relatives of our students who are key workers and NHS Staff members, the utmost of Thank Yous for all your incredible work, and for helping realise it all so quickly”.

Anna and Ollie further explain how the project came to life: ‘We initially had the idea to create an original song for the NHS and reached out to John Murrell at Finger music, who (along with his team) was an invaluable collaborator. He suggested that we went with a well known track that people could sing along to, that we could use to accompany the user generated footage, obtained through MJM and Stage and Screen. We agreed upon ‘It Must Be Love’ and they had a composed guide track to us within 24hours, created by the incredible David Anthony Adams. Their insight into what was needed to lift the visuals ultimately elevated the film and helped to make it the best it possibly could be. Obviously music was absolutely key to this project and Finger Music were brilliant partners in this process, making it effortless with their knowledge and experience.’

John Murrell comments: "Quick turnarounds, close collaboration, remote recording. It's what we are used to. What a fantastic cause and a pleasure to help. Thank you NHS from all of us. You are the heroes!”

Produced by Dark Energy, MD Matt Brown adds: ‘We are delighted to be doing something to give back to our NHS heroes. Any way we can use our network of contacts to create something uplifting, supportive and ultimately that helps to keep people indoors and raise funds, was a pleasure to be involved in. It also demonstrates how special the industry is, what we’re capable of when we pull together and how quickly we can turn projects around, with the right idea and people at the table.

The film was edited by Joe Walton at Whitehouse Post. ‘Again the creative input from Joe was such an enormous help and a real reminder why the true craft of editing is so important. This was never going to be an easy one to pull together but both he and his edit assistant Steven were utterly brilliant and helped to find those moments that give the film its heart. All of the Whitehouse founders were hugely supportive of the project and we are so grateful to them for offering up their resources, talent and time. Without a director on the project, the editor was such a key component and Joe was utterly amazing.

Whitehouse co-founder and editor John Smith comments: “ The Whitehouse were delighted to be asked to help out for our amazing NHS ..we often forget how lucky we are to have these incredible people fighting for our lives ....and right now more than ever in our lifetime we are truly indebted to them ...god bless the NHS "

The EPs conclude ‘We see this as a a truly collaborative project by Dark Energy, Mark Jermin Management, Stage and Screen, Finger Music and Whitehouse Post and a feat of remote working and creativity. We hope that it raises awareness and funds. We must also say a big thank you to all the families that sent in content that didn’t make the final cut. Everyone made such a huge effort and we’re enormously grateful.’