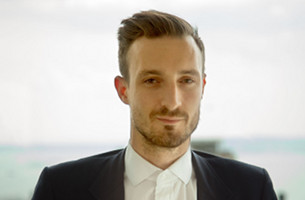 Christie recently graduated from MIT with a Master’s Degree in Art, Culture and Technology, and Isobar is his first foray into the brand building business. Perhaps best known for co-creating the Mondo Spider, a pure-electric 1,500 lb. walking vehicle, Christie also received numerous accolades as the lead engineer on the Copenhagen Wheel electric bike project. In 2014, he created and exhibited Local Warming, a massive motion tracking robotic heating installation at the Venice Biennale. In his spare time, Christie invents things like folding skateboards and pancake making machines, and has appeared on the speaking circuit at conferences like TEDx.

“After spending many years coming up with wild ideas and prototypes with an eye toward experimentation rather than a clear business purpose, I’m excited at the prospect of building strategic products and solutions for brands that solve real consumer problems,” Christie said. “More than anything, I’m interested in solutions that scale quickly. It’s a completely different approach than what I’m used to, but I’m up for the challenge and excited to take on this new role at Isobar.”

“As members of the MIT Media Lab, we’re big fans of the incredible thinking and radical concepts to emerge from the Lab,” said Meeker. “We couldn’t be happier that Leigh has decided to bring his talents to Isobar and I’m personally excited to work alongside him to continue to accelerate our innovation practice and bring even bigger ideas to our client brands. “.

“In an industry where omnichannel retail seems all but inevitable, it’s critical to have the right talent to lead the way into this next chapter for retail brands,” Moy commented. “Leigh is one of the most exciting people to emerge from the greater MIT Media Lab community and we’re thrilled to count him as part of the team.”