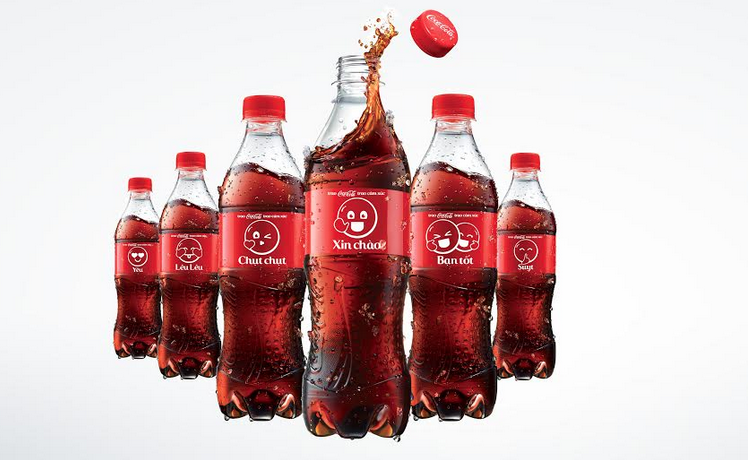 This summer Coca-Cola launched the latest installment of the world-famous ‘Share A Coke’ campaign with ‘Share A Feeling’. Using the universal language of emoticons, the campaign is encouraging millennials to express themselves via emoticons on Coke cans and bottles.

The multi-market, integrated campaign begun in July, and was first seen in Vietnam. The accompanying TVC has drawn over 1.7million views on YouTube from first airing, only three weeks ago.

Multiple communications agencies were involved in its creation: Droga5 Sydney developed the concept, Isobar Singapore led the creative output by designing the emoticons and packaging labels, creating the TVC, OOH, social media video content, as well as digital engagement ideas. Agencies OgilvyOne and MediaCom have helped deploy it in Vietnam.

Vietnam kicked of the first phase of the campaign with bloggers and local celebrities introducing the specially designed Coke Emoticons as the new hot language in town. Media partnerships with Facebook and the largest local messaging platform, Zalo, were brokered to ensure the high virality of the campaign.

The second phase of the campaign will inspire youth to act and share their own stories. Coke will give people a way to express how they feel by allowing consumers to personalize cans at key outlets popular with the youth, as well as customize stickers on Zalo chat.

The campaign is being supported with a strong commercial program to drive the business at the retail level. It will be rolling out across ASEAN markets over the next 12 months.

There is strong excitement within the Coke Vietnam team as expressed by Uyen Pham Na, marketing director, Coca-Cola Vietnam: "Share a Coke emoticons is, once again, proving our way of doing marketing with the “Consumer at heart.”

“I believe Coke Emoticons will be a new way for Vietnamese teens to communicate their feelings. This campaign not only brings Coca-Cola closer to our consumer but also benefits our business with promising volume increase."

Stan Lim, creative director, Isobar Singapore said: “Working on the latest iteration of ‘Share A Coke’ has been a dream scenario for Isobar. By personalizing their product with names and now the ubiquitous language of emoticons, Coke and the agency team has created something that seamlessly blends online and offline behaviours, that travels across borders, that will live and grow in the virtual and in the physical world.”