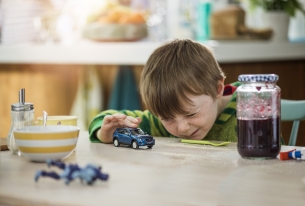 Auto Trader, the largest the UK’s largest digital automotive marketplace for buying and selling new and used vehicles, is launching a new TV campaign that showcases the ease of selling a car through its private online listings. Created by Isobar and directed by Jackie Oudney through The Gate, the film takes the perspective of a little boy whose growing family needs to upgrade to a bigger car. We see how, by giving consumers access to three times more buyers than any other site, it’s never been easier to sell a car through Auto Trader.

The new TV campaign launches on 1st September and will run throughout September and October, encouraging both buyers and sellers to use Auto Trader. The advert focuses on a family’s need to change their car, following the imminent arrival of a new baby, and is shown through the eyes of a young boy helping his Dad prepare to sell their car.

The advert’s messaging aims to reinforce Auto Trader’s audience leadership position, over 80% of all time spent on classified sites is spent on Auto Trader.  The use of multiple cars (hatchback and family SUV) also highlights the range of cars available through Auto Trader. It focuses on both buying and selling, as 95% of all sellers are also buyers.

Naomi Hahn, Director of Audience and Brand at Auto Trader, comments:  “It’s really important for us to continue to grow our audience and that’s all about increasing our relevancy to consumers. We help throughout the whole car buying process and our new ‘Little Sister’ campaign shows consumers just how easy it is to sell their car through Auto Trader, and also offers them a huge choice of cars from thousands of dealers and private sellers to buy.”

The campaign will reach: 21.9M ABC1 adults, Auto Trader’s core buying and selling audience and will be broadcast on primetime programming across ITV, Channel 4, Sky 1, Sky Atlantic and E4; as well as demand websites including 4od, Sky Go and Demand 5.

To support and amplify the TV burst, the campaign will also include activity across digital display, social, PR, email, direct mail and PPC.  Auto Trader will also take over high-engagement sites such as Yahoo and The Telegraph to extend its reach beyond TV in a bid to drive consumers through to the Auto Trader site.

The brand will also increase investment in PPC and display to ensure its leveraging the interest generated by TV to capture as many in-market consumers as possible, delivering increased traffic to the site.

Simon Clancy Group Creative Director from Isobar comments: "Selling is often an afterthought when upgrading to a new car. We hoped to demonstrate that Auto Trader makes the process easier, and a little extra effort is worth it in the end."