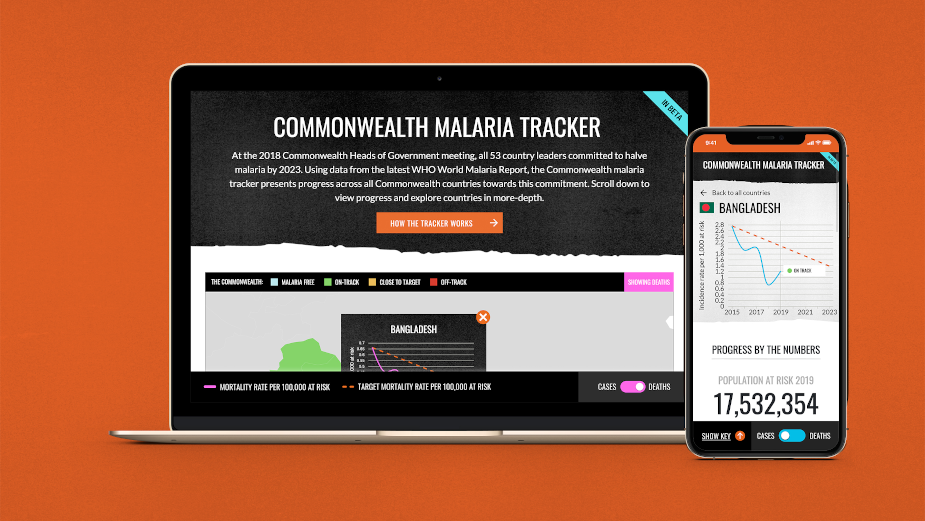 Isobar and Malaria No More UK have launched a new interactive tracker to help Commonwealth countries review progress against their commitments in the fight against malaria.

Agreed at the London Commonwealth Heads of Government Meeting in 2018, all Commonwealth leaders agreed to halve malaria by 2023. Malaria is one of the world’s deadliest diseases. Despite significant progress since the millennium, malaria still kills a child every two minutes. The Commonwealth carries a disproportionate level of the global malaria burden. Despite having only a third of the world’s population, it has over half the deaths and cases from malaria each year. As many countries in the Commonwealth are of low and middle income status, experts fear that COVID-19 could still potentially cause a significant increase in deaths as access to malaria medicines, services and essential healthcare are interrupted and delayed.

Built using data from the World Health Organisation’s annual World Malaria Report 2020, the dynamic tracker provides a snapshot of progress against malaria across the Commonwealth, as well as showcasing efforts made in each specific country. This is the first time that leaders will be able to see, at a glance, which countries are on-track to achieving their commitments, and which need to accelerate progress.

The tool also allows users to easily access country specific resources from key partners, such as the African Leaders Malaria Alliance country scorecards. This feature aims to make the site an effective tool for sharing best practice from around the world.

The tracker was developed on a pro-bono basis by global creative experience agency Isobar, as part of parent organisation dentsu’s ongoing commitment to Malaria No More. It also benefits from the expertise of the African Leaders Malaria Alliance, the Asia Pacific Leaders Malaria Alliance, the RBM Partnership to End Malaria, the World Health Organisation and Malaria No More UK.

The Chair of the Commonwealth’s Advisory Committee on Health (CACH), Dr. Daisy Mendez of Belize, said: “The Commonwealth tracker shows how creative, digital solutions can make complex information more easily accessible. I am proud, as Chair of the CACH, that we can support member countries and Commonwealth partners with this new tool, and hope that it galvanises our collective resolve to defeat malaria together.”

Iain Valentine, CEO Isobar UK&I, commented: “When we started this project it would have been impossible to comprehend how important and far reaching it would become, and the fact that our work at Isobar will make meaningful difference to the lives of so many is both humbling and inspiring. It’s great to see the tangible impact that bringing creative and tech together can have, and it’s been a privilege to see the level of coordination between creatives, engineers, data experts, UX designers and innovators all working to make a difference and support those at the heart of Malaria No More.”

Michael Hamilton, digital marketing manager at Malaria No More UK, added: “Isobar have been the most patient and understanding team to work with, and we thoroughly appreciate their determination to get this designed, built, and live. Their work will help commonwealth leaders fulfil their commitments on malaria.”

The tracker builds from dentsu’s ground-breaking campaign “Draw the Line”, first launched across Africa in February 2021, and the supporting animation voiced by Yemi Alade Grammy Award-winning Nigerian Afropop singer, songwriter, actress and activist on World Malaria Day in April. The campaign launched a unifying global platform designed to capture youth, community and public imagination. The campaign aims to generate mass awareness and high visibility for the Zero Malaria Starts with Me movement across malaria-affected countries and beyond, and reflects the huge energy, talent, and cultural influence emanating from the African continent with references to art, fashion, music, sport, and entertainment.

The team behind the Zero Malaria Starts with Me movement and Draw the Line campaign will speak as part of Cannes Lions Live this week.

The Work That Made Me: Daniel Sytsma
View all News