Is Virtual Reality the Scariest Medium Yet?

Trends and Insight 452 Add to collection

This Halloween, we ask the experts why VR has the power to scare us silly 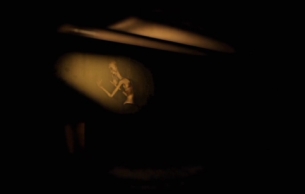 Fingers. Family-sized boxes of popcorn. Cushions. Other people’s shoulders. All proven defences against the very scariest horror films. But as virtual reality continues to loom over popular culture, spreading like a slow, determined mist, these stalwart comforters are losing their power. Don an Oculus headset and there can be no diving behind the sofa when terror strikes.

If you’re floating through a forest fairyland or hanging out with your favourite superheroes, VR entrances, delights, thrills. Virtual reality, though, is hiding a dark and terrible secret; when it comes to horror, it can induce fear like no other medium.

Carl Davies of Happy Finish reckons that the fear factor comes from placing the viewer directly at the centre of the action. “In traditional horror when something jumps out at you, you are looking in just one direction, towards the TV. So the thrill and anticipation are restricted to when something is going to shock you. With VR, it’s not just when, but where from!”

In an age of multi-screening, virtual reality shuts us off from these distractions to ensure a truly immersive experience, says Andre Assalino, MPC’s Interactive Creative Director (who worked with Vrse to create Guy Shelmerdine’s acclaimed VR experience ‘Catatonic’, set in a creaking asylum, and has been working on a more PG-rated taste of VR terror for upcoming Jack Black movie Goosebumps). Andre likens headsets to a sinister ‘content-delivering/experience-enabling blindfold’.

“While immersion can be optional when watching content, which explains the rise of multiscreening, it is essential to trigger feelings of empathy, sadness, and of course, terror,” he says. “It makes sense then, that giving the viewer control over where to look and how to navigate, and eliminating all distractions, would cause a deep sense of enthralment and with it, depending on the content, a deep sense of fear.”

As well as smashing through physical barriers, like Jack Torrance at the bathroom door with his axe, VR tears down psychological boundaries. UNIT9’s Henry Cowling, who is creative director of the company’s virtual reality division, speculates that it has the potential to induce not just fright but a more profound sense of unease.

“Presence implies complicity, true voyeurism even guilt. It’s the difference between watching a scene and witnessing an event. For this reason, virtual horror goes beyond simply scary. It can leave you with a complicated, lingering feeling of having really seen something horrible. A sort of virtual post-traumatic stress disorder.”

One way to accelerate your victim’s… err… viewer’s heart rate is to add an element of interactivity. As anyone who has ever been jumped in a cave by a blocky and poorly rendered creeper in Minecraft can attest, simple games can be just as terrifying as the goriest of horror films. Researchers have even found that video games can trigger more anxious feelings than traditional horror movies. Unlike passive media such as TV and film, gaming requires a degree of focus and concentration, which heightens the feeling of immersion (check out some amusing personal accounts here and here). The worlds of virtual reality and gaming are converging (Oculus Rift will have its own gaming platform and PlayStation and Steam are busy developing their own headsets), and our experts agree that it could mean that there’s real potential for next level scares.

“We’re always excited about new VR developments,” says Solomon Rogers from Rewind. “It would be brilliant to see a truly frightening, fully playable VR game and there are several already in development through crowd-funding sites like Kickstarter. Everyone always likes to think they could survive in a horror scenario, and it would be great fun to see if they would actually be any good when push comes to shove.”

Henry Cowling also sees the potential – although we suspect that you won’t find him volunteering to pick up the controller. “You’re talking to a guy who was too scared to play Resident Evil on PS2… I don’t have the cojones for VR horror games, unless there’s a button that teleports you to under your bedcovers whenever you want,” he says (we’re with you there, Henry).

“We are, however, working with directors from the gaming world. Horton de Rakoff combines 10 years of experience at Rockstar Games with a cinematic approach to VR. We find a gaming background contributes greatly to spatial storytelling ability, because in many ways VR is more similar to gaming than film,” he says. “Interactive experiences are much more immersive than passive VR. Particularly with the new generation of hand controllers allowing users to interact in a human way with the scene. Virtual games will certainly take horror to the next level… it’s just not a level I want to go… in fact I’m getting goose bumps just thinking about it.”

So. You’ve decided to embrace your inner sadist and create a horror experience to loosen the bowels of even the most stout-hearted… but unless you’re actually the Jigsaw Killer, you might need to reign yourself in a tad.

Solomon at Rewind points out that if you push a viewer too far, they may even injure themselves. “A little scare goes far, far further in VR than on a TV screen. Jump scares can also be physically dangerous as the audience will really move away from what has scared them and may actually fall down and hurt themselves. The other thing is that the psychology of VR is still to be really researched, as people really now remember 'being there' from VR, instead of remembering 'watching' something. This fundamental fact could be the most important part, as those memories are far longer lasting and possibly far more damaging to the psyche.”

Of course, what sends thrilling shivers across the skin of one person might reduce the next to a blubbering mess, as both Solomon at Rewind and Andre at MPC point out. That means that the line between ‘scary’ and ‘too scary’ is a fine and flexible one. “For some people VR can be just too scary. The good news is that when it gets to that point, all they have to do is remove the headset,” says Andre.

Delicate nerves aside, there are also technical issues to consider when concocting a virtual reality horror show. It can be tempting to get right up in the viewer’s face but the way that the stereoscopic images are created means that it can be downright impractical, as Happy Finish found during one of their early experiments, a hat-tip to Hitchcock.

“When Happy Finish first started experimenting with VR, about three years ago, we shot all kinds of crazy test films,” recalls Carl. “One such test involved us taking one of our 360 cameras, placing it on the outside floor of our open-air car park in Shoreditch, and throwing muesli at it. Within seconds, dozens of pigeons descended and hungrily pecked away at it. When you wear a headset and watch that, you feel like Tippi Hedren in Hitchcock's ‘The Birds’, with a bunch of crazed birds trying to peck your eyeballs out!

“Actually, doing this test taught us a good technical shooting lesson! Objects which are too close to camera, and therefore in front of the lens’ convergence points, disappear then reappear as they move closely from one lens in the rig to another; so with VR, things tend to work better when they are in the mid to background.”

Over the past two years, directors and producers have been devising a whole new visual language as filmmaking techniques and terminology don’t always translate to the world of VR. Jump cuts and disorientation are out – no one wants to trigger nausea – behavioural nudges are in. Argues Henry from Unit 9, the creators of horror experiences will need to ditch many of its usual tricks and, for now, creators are still trying to grope around in the dark, feeling things out.

“We haven’t seen anything yet,” he says. “Our recent experiments with horror themes, such as Meet The Family by Exzeb and Storm by Anrick, are precisely that: experiments. To really deliver on the potential of virtual horror, we need to reinvent the genre conventions of horror for VR. It’s not just a question of copy and pasting them from film. “This is a big, collective task. It took horror decades to evolve in film - and most of what was learned will not apply to VR,” he continues. But the potential rewards for those who get it right are massive. “I believe the potential market for virtual horror experiences is huge. There’s an appetite for shock and gore in every medium, outside of interpretive dance. Virtual reality will deliver horror on steroids.”

Spooky Halloween Experiences to Try... If You Dare

This experiment from Unit9 has just been released and it’s all about exploring the impact that VR can have on our emotions. Joy, wonder, delight, excitement… oh yes… and fear.

Last year, Happy Finish teamed up with Director Ryan Hopkinson, represented by White Lodge, and sound engineers Father to create a 360-degree horror video for Oculus Rift, called Follow The Light. Viewers were taken through some deep, dark, scary corridors, with only a torchlight to guide them. People jumped out of their skins when watching it, as can be seen here!

Earlier this year MPC worked with Vrse to create Catatonic, a VR journey through an insane asylum strapped into a wheelchair, guaranteed to make people squirm in their seats. The Vrse team even brought Catatonic (and a wheelchair) down tto the LBB Beach at Cannes this year – and we can confirm, it’s terrifying.

Firstborn and Audible teamed up to bring best-selling graphic novel series, Locke & Key, to life. They brought the experience to life for New York Comic Con, and faced a horror-hungry hoarde of fans desperate to give it a go.

Forget Freddy Kruger, Michael Myers or Leatherface – in this scary survival game from Unit9, it’s the freezing weather that’s out to get you…

It’s a couple of years old now, but Alone is an incredibly clever game-within-a-game that overcomes the problems of traversing environments that VR can present. In it, you play as a gamer, sitting in a living room… what could possibly be scary about that?