Is This the Most Epic Rube Goldberg Contraption Yet? 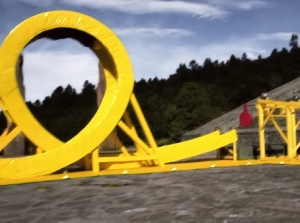 The Rube Goldberg-inspired chain reaction is the centerpiece of National Geographic Channels International’s Entertain Your Brain spot, which promotes the network’s science-minded block of programming including Brain Games, Science of Stupid and Street Genius, returning to international audiences in early 2015. National Geographic’s vision was brought to life by Click 3X and their Director Manny Bernardez, who worked hand in hand with Production Designer Bernardo Trujillio for over two months to develop and build this wonderous contraption.

Inspired by famous American cartoonist Rube Goldberg, well-known for gadgets that performed simple tasks in intricate ways, the spot was filmed outside Mexico City at the Otomi Ceremonial Center, a center that promotes and preserves the culture of the indigenous Otomi people. The Entertain Your Brain stunt plays upon viewers’ fascination with the incredible workings of science and the human mind, from the origins of the Otomi tribe to present day. It also underscores National Geographic Channels International’s commitment to delivering engaging and thought-provoking programming to audiences.

And watch as Tim Shaw, host of Street Genius, NGCI’s series that demonstrates how science can transform mundane items into catalysts for amazing experiments, guides viewers through the exciting series of contraptions and chain reactions.