Is This the Fastest Dunkin' Donuts Run Ever? 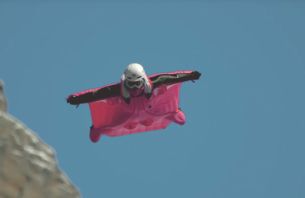 Wearing Dunkin’ colours and a custom-built wingsuit equipped with a Velcro sleeve, Brennan jumped off Aiguille de Varan, a mountaintop 8,346 feet high above the action-sports mecca of Chamonix, France.

Flying at speeds of 115-120 MPH, and after 30 attempts, Brennan grabbed a Dunkin’ bag mid-flight from a specially-designed cliffside Dunkin’ storefront, built at an altitude of 5,315 feet.

Sherrill Kaplan, Vice President of Digital Marketing and Innovation, Dunkin’ Donuts US, commented: “On-the-Go Ordering represents one of Dunkin’ Donuts’ most exciting and important advances, and with today’s national launch we have achieved an entirely new level of speed and convenience we can offer our busy, on-the-go DD Perks members.”

On the jump, Ellen Brennan said: “When I got approached by Dunkin’ Donuts asking if it was possible to grab a bag in flight, I was like, ‘yeah I don’t see why not, but that’s a completely crazy idea and no one’s ever thought of it before, and it’s never been done. So, yes I’d love to try it'".