We ask experts from Inition, Rewind and Visualise to give their verdict on the relationship between sex and virtual reality 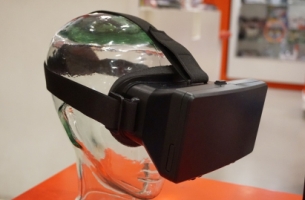 If you work in advertising, it can feel like virtual reality is everywhere. Out there in the real world (for what is the ad industry if not a little bubble of unreality?), VR is certainly getting coverage in mainstream press and TV but it’s yet to have achieved mass uptake. Could immersive pornography be the thing that kicks off VR’s adoption by the public? And does VR have the potential to completely disrupt the way we have sex? We probed the industry’s experts to find out…

There is a definite buzz around virtual reality (VR) and the commercial launches of the likes of the Oculus Rift, Samsung Gear, Sony VR and HTV Vive set ups mean that 2016 is the year that VR will be available in homes. The question is, how soon before VR pornography becomes as common as a crinkled Daily Sport was in the '90s, or a default private browser setting is currently?

With virtual reality set to become a huge part of our everyday lives, it is not difficult to see how VR may disrupt the way we watch pornography and even have sexual experiences. It is often said that pornography was one of the main drivers of the mass adoption of the internet and there are those forecasting that it could have the same effect on virtual reality.

Virtual reality is already seeing an evolution within the adult entertainment industry but right now, the experiences are seen as a novelty at best. Contrary to what some in the pornography industry may say, there is little doubt that most people’s experiences will be a primarily visual one. Not for a second would we wish to undermine some of the fine narratives and soundtracks that have been part of some of the industry over the years, but there is probably a reason why we are yet to see Hans Zimmer score, or Joel Schumacher direct a porno. This reliance on the visual aspects of the experience may well be one of the limiting factors around the mass-market penetration of pornography using VR headsets as a medium. The current limitations in graphics quality may not make for a perfect solution at the moment.

Another consideration is the cost involved. Creating a VR experience is not cheap and the production around this is still relatively specialised. In a marketplace where budgets tend not to stretch into the hundreds of thousands, creating an experience which is optimised for virtual reality may not be as simple as people would hope.

However, saying that, there is no doubt that if general market commercial enthusiasm for VR increases, there will be those who will be willing to invest the money to create an experience which is more immersive than a muted iPhone.

The possibility may exist in the future for aficionados of VR pornography to create their own ‘user journeys’, based on their individual desires and fetishes. It is easy to see why some people could really get behind the idea of VR pornography to explore their own sexuality in a safe and comfortable environment. At its peak, VR pornography may become integrated with social sex toys, or “teledildonics” to create an even more enriched experience.

In conclusion, whilst there is massive potential for virtual reality, the potential for virtual reality pornography is not so clear-cut. The immersive nature of VR lends itself in principle perfectly, but the limitations of the hardware currently and the knowledge needed to create an efficient production workflow may mean that for the time being we will need to stick to good old fashioned dimmed lights and laptops.

Before I start, let me just say that REWIND has been approached many times by production companies the world over to create content in this space, and we have politely turned them down as it’s just not an area we feel comfortable working in. Some people will make huge amounts of money from this, but it’s just not going to be us!

We believe the true catalyst for VR will be gaming and immersive experiences... but it is true that pornography will lend a hand (no pun intended) as a major catalyst for general mass adoption of VR. The more interesting area for me is where we go beyond the passive linear content currently being produced and into the unknown area of AI, or at least the illusion of AI.

We all know how strangely affectionate and attached we all got to our Tamagotchis, and I feel that soon – sooner than we are willing to admit – VR girlfriends and boyfriends of the future will possess such deep mental and possibly physical connections with the users that their feelings and ‘relationships’ become just as real and meaningful as some of our real world ones. The gamers of today connect with game characters in such a strong way that we can almost consider them real. People genuinely shed real tears for the death or loss of their favourite virtual characters. However, these characters only have a rudimental Artificial Intelligence and have no real way to sense our emotions.

Kinect technology gave us basic emotional recognition, but was never used to its maximum potential in gaming. New VR headsets that have facial recognition and eye tracking built in can now allow virtual characters to recognise real subtle emotional cues that we give, giving away our true feelings or intentions subconsciously through facial expression, eye contact and body language. These connections may manifest in simple ‘better’ virtual sex using device connected apparatus such as ‘teledildonics’, (WARNING: do NOT Google this term at work!) but actually could go so far as to help us and our AI companions understand each other better, creating connections based upon real affection, with far stronger implications than we can ever imagine... even true love is possible.