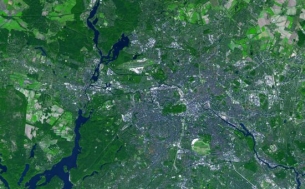 “Germany is a very, very strong economy, yet still the global accounts are run out of New York and London and some of the Asian hubs. That’s hard to come to terms with and not really understandable,” says Benedikt Holtappels, CEO, GGH MullenLowe.

A quick search on Google will reveal that Germany is behind only China and the USA in terms of its value of merchandise exports, totally eclipsing its closest runner Japan. Yet, as GGH MullenLowe’s Benedikt Holtappels says, the vast majority of global ad accounts are still run out of London, New York and a smattering of Asian centres - and to the Germany industry it’s never really made sense.

But that could be all changing. The last five years alone have seen 14 significant mergers and acquisitions by the big networks. The hip indies are realising their global ambition by hitching up with the big boys. Heimat has joined TBWA, Pixelpark has gone to Publicis, Lowe & Partners (now MullenLowe Group) acquired Grimm Gallun Holtappels (GGH), and J. Walter Thompson snapped up Hirschen Group.

So what is pushing the changes and is it signalling a more global future for the German industry? According to Oliver Meschke, Managing Director at The Talent Business in Germany, the increase of acquisitions in Germany can be accredited to numerous factors.

First up there’s Germany’s independently-driven agency culture, something that Oliver believes is globally unique. “The majority of media billings still go through the hands of independent agencies,” he says. But while these independents of the late ‘80s and early ‘90s, such as Springer & Jacoby and its offspring Jung von Matt, bloomed in the 2000s and are still performing strongly, Oliver believes that it’s never been more challenging to launch a mainstream creative agency startup and drive business. “For these offspring agencies, a sale could be an opportunity to step up a notch, internationalise business, drive scale and world on global brands that motivate them to creative excellence and more fame and fortune,” he surmises.

It’s a point that Benedikt of GGH MullenLowe drives home when discussing his reasons for merging GGH into the MullenLowe group. Around 2011, after three years in action, GGH had achieved the goals which Benedikt and his partners had set early on. They were a 35-40 people strong shop with fairly high rankings in terms of creativity. “We then began looking at what our next steps might be, such as having the chance to work on international projects with international clients. We felt that we needed some more expertise in what we then called 360-degree advertising,” Benedikt says. “The companies in Germany that we looked up to and could do 360-degree advertising were mostly 300-plus people, and we were still quite some way from that. So it made sense to join a network of agencies that could help us out and make us better at the same time.”

The Talent Business’ Oliver also links recent German acquisitions to traditional creative agencies’ sluggishness in developing a full service digital offering . And that’s something that every major market around the world is experiencing. “The holding companies have been acquiring digital independents in all their key markets - some of which have continued to trade as standalone local or global digital independents, and some of which have been merged into creative or media networks,” Oliver notes.

For Bernd Adams, COO of J. Walter Thompson Germany, who last year acquired Hirschen Group, the globalisation of the German ad industry is also linked to the so-called German ‘Mittelstand’ concept. The Mittelstand is a whole range of small and medium-sized companies in Germany that are famously productive and provide heaps of jobs to the local economy. The term has become so synonymous in Germany that other countries around the world have taken it into local language because there is no exact equivalent for it.

“This German industry is still in the midst of an internationalisation process,” says Bernd. “As most of the German agencies can’t follow their clients to other countries (because they don’t have international offices or market insights), it’s important for them to be able to rely on a strong international partner. After all, it’s usually easier for clients to have just one partner across all markets, and that’s when networks come into play.”

Now that they’ve been snapped up, what impact can these smaller German shops have on the global industry? And where is the industry here headed? J. Walter Thompson’s Bernd highlights the eminent agility of such agencies. “Their internal decision-making processes are much quicker. It will be interesting to see how they perform when it comes to handling multi-national clients and campaigns,” he says. “Cooperations and acquisitions would allow the smaller shops to complement the product portfolio of a network agency through their unique perception of the market.”

As for the future, Oliver of The Talent Business notes that, while we should expect the networks to continue with their acquisitions (like in many other markets), we should also keep an eye on the buying patterns of independents. “Germany’s largest independent agencies, for instance Serviceplan (net revenue of €300 million with a headcount of 2,700 people) or Jung von Matt (net revenue of €80 million with a headcount of 800 people, in Germany alone) are now buying their way into internationalisation and organic growth beyond the German border,” he remarks. “Another great example is Berlin-headquartered content marketing agency C3 buying their way into the UK by acquiring Seven earlier this year.”

Looking to the Future

18 months after he took the plunge and became part of the MullenLowe family, GGH’s Benedikt is feeling positive. The agency has grown from 35-40 people to over 100 and he says that he and his partners have “good reasons to believe that this was because of the merger”.

What’s more, when casting an eye over the industry more generally, he sees good things for the future. “Once we’ve done our homework in terms of reputation and how we see ourselves as an industry and how we act, I think we will be a more sophisticated and less superficial industry.

“I’m very happy to be working here because I know that creativity is the best thing to sell and it inspires people. But we need to grown up. Once we do that, we will be in a better state. I see nothing but a good future for us.”