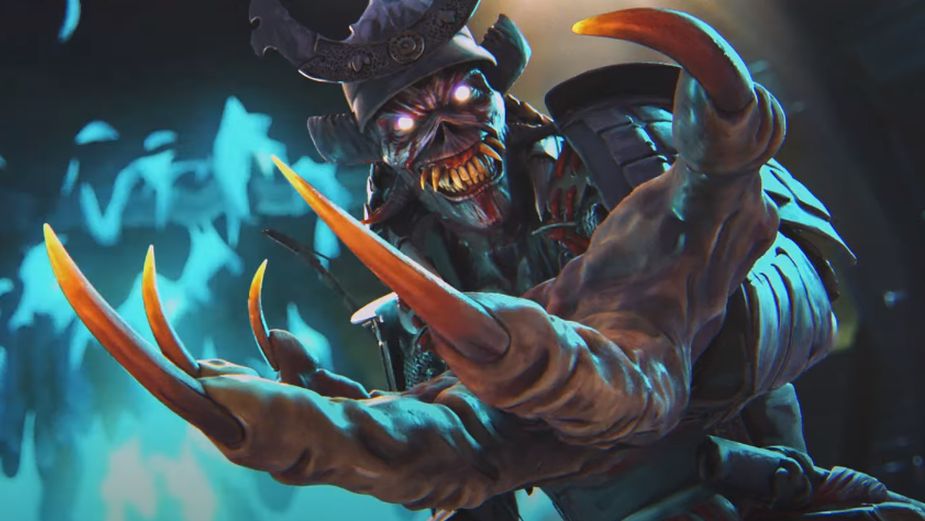 Blinkink director Nicos Livesey welcomes you to Belshazzar’s Feast through an epic six-minute 2D and 3D animated music video for Iron Maiden’s new single The Writing on the Wall.

This project is a dream come true for lifelong Maiden and heavy metal head, Nicos. When Warner’s video commissioner Sam Seager asked if Nicos was available for the project, Blinkink’s head of music videos, Josef Byrne, simply sent a photo of Nicos wearing an Iron Maiden t-shirt. There wasn’t a chance he was missing this one.
The project had an unothodox beginning; veteran Pixar artist Mark Andrews who’s films include Pixar’s Brave and Legend of Mor’du was working alongside ex-Pixar animator Andrew Gordon on potential ways they could work with Iron Maiden, when talk of an animated music video arose. As big Maiden fans, they pivoted at the chance.
Lead singer Bruce Dickinson was heavily involved in the project from the get-go, supplying a one-page synopsis for Mark, who then worked on some incredible storyboards which served as a basis for Nicos Livesey and Blinkink to bring the production to life.
Nicos seized the opportunity, using his talent and passion for the band, working closely with Bruce, Phantom Management and Mark to define the narrative and expand Iron Maiden’s design world into new territory. This extended to the use of painted backgrounds, using over 70 different images for the interior shots alone. The first look at the latest iteration of perennial Maiden icon, Eddie was created in CG to evoke the hand-painted effect present on many Iron Maiden album covers. All of this combined creates a fresh, epic experience that is still distinctly Iron Maiden.

The project took a total of eight months to complete in lockdown with around 60 crew members working across the globe in the UK, France, Spain, Norway, Brazil, Ireland, Italy, Hungary, Romania, Germany, Greece, USA, and Canada.

With inspiration taken from the biblical book, the story of Daniel and Sons of Anarchy, we are taken on a journey through a dystopian world ravaged by pollution and drought, ruled by the elite class as they gear up for an exclusive party.

Along the way, we meet a mysterious cloaked figure who summons the Four Bikers of the Apocalypse to a deadly desert get together, where we find a king vampire feasting off the souls of the young. The figure reveals himself to be the latest iteration of Iron Maiden’s irrepressible Eddie, quickly putting an end to the party by turning the vampire into a goat. He then frees a man and a woman from two giant test tubes, who crawl into the back of his Cadillac. As Eddie pulls off into the distance in the nick of time, he tosses the pair an apple that they devour, explosions litter the land behind them.

It’s a huge, epic masterpiece, created with some of the best names in animation. From Pixar to Blinkink, Iron Maiden to Nicos. It is a true collaboration of passion made during lockdown for the millions of rock and animation fans around the world.