BBDO New York, Capitol Records, and Open The Portal animation studio team up to tell a visual story loosely based on the song’s lyrics about the isolation and internal conflict experienced by many last year 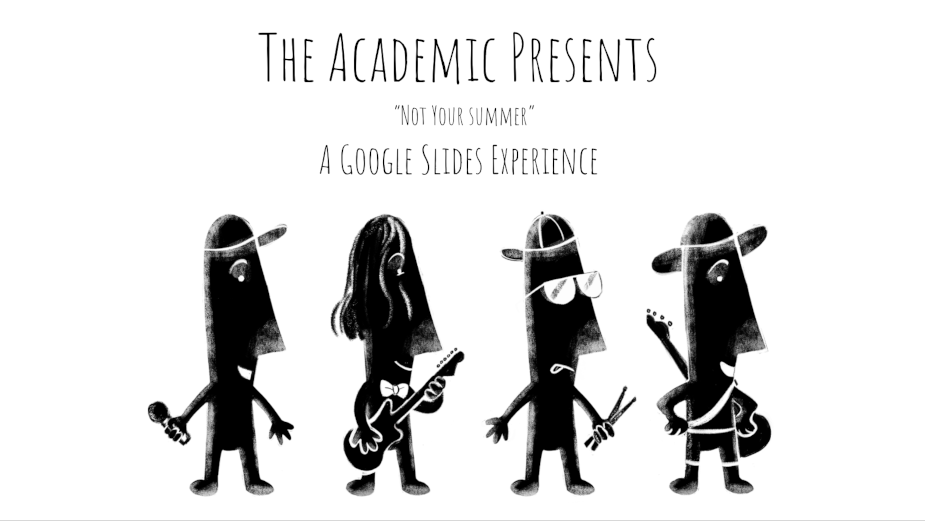 Today, to share the experience further, The Academic have just launched a music video (an edited screen capture of the live performance), and a brand new behind-the-scenes video. Watch below:

Created by BBDO New York, Capitol Records, and Open The Portal animation studio, the musical experience was built out in real-time with a team of animators and all four band members themselves collaborating behind the scenes to create and delete slides every second. The resulting animation tells a visual story loosely based on the song’s lyrics about the isolation and internal conflict experienced by many last year.

“The strong, universal feeling of ‘I need to get away from me,’ is one that transcends this moment in time. We used that emotion of not feeling happy with, and needing a break from, yourself as a thread throughout the experience. The main character literally breaks away from his own alter ego, resulting in an exciting chase across different pages in Google Slides, while featuring the platform’s many capabilities in creative ways,” said Bart Mol, SVP, senior creative director, and live animator, BBDO NY.

By using Google Slides, The Academic, who’ve been unable to perform live in front of audiences throughout the pandemic, were still able to provide a unique live experience for fans to help launch their latest EP. The band members even interacted with guests in real-time by typing in the slides during the 15-minute pre-show.

“One of the things we’ve missed most throughout this pandemic has been interacting with our fans and creating unforgettable moments for them through music. We were thrilled to collaborate with BBDO and Open The Portal to create this totally new, virtual musical experience in Google Slides. Not only was it a clever way to say ‘hi’ to our fans, but we live for finding these new techy ways to make our music stand out from the rest,” said Craig Fitzgerald, lead singer, The Academic.

The effort is an evolutionary follow-up to BBDO NY & The Academic’s 2017 ‘Live Looper.” The equally innovative live musical performance was hosted on Facebook Live, turning the platform into a global stage, and ultimately winning top industry accolades including Gold at Cannes Lions, D&AD, One Show, and Webby’s, among others.