Iris Kicks Off Domino's & Hollyoaks Deal with a Bit of Humour 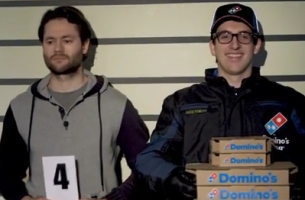 Global creative agency Iris is responsible for the sponsorship idents which feature a fictional production crew filming on the set of Hollyoaks when they are interrupted by a delivery… “Who ordered Domino’s?”

Hollyoaks enjoyed a hugely successful 2014, voted Best Soap of the Year at the British Soap Awards whilst its audience continues to grow.

Combining the Channel 4 broadcast with the First Look episode on E4, Hollyoaks attracted an average audience of 2.3m viewers per episode in 2014, up +13% year-on-year. The series regularly drew the highest share of 16-34 year olds viewers to 6.30pm weekdays on Channel 4 and experienced a record breaking year on E4. PC VoD views were up a significant +62% year-on-year with the series averaging 2.13m views a month.

Rupinder Downie, Partnership Controller, Channel 4 said: “Hollyoaks provides Domino’s with the perfect platform to engage with Channel 4’s uniquely sizeable 1634 audience nearly every day of the week and we’re looking forward to working with Domino’s over the next two years around a show that continues to go from strength to strength.

Whilst broadcast sponsorship lies at the heart of this partnership our relationship with Lime Pictures provides additional exciting licence and activation opportunities.”

Simon Wallis Sales & Marketing Director, Domino’s said: “Our long term sponsorship will see Domino’s Pizza dominate early evening TV viewing and ensure we are speaking to the heart of our core audience just when they are thinking about how to solve their hunger pains.   Hollyoaks is giving us tremendous creative opportunities to ensure this partnership lives beyond the TV screen thus allowing us to play around with our unique tone of voice and develop targeted communications.  We are excited to expand these further with Lime and Channel 4 over the coming months."

Kay Tasker, Group Business Director, Arena said: “The Hollyoaks sponsorship gives Domino's access to a wide audience who are engaged with and passionate about the show as well as being particularly digitally savvy. Online and mobile continue to be highly important for Domino's and both are a key part of its growth plans. The Hollyoaks brand is unique and the audience continues to swell, so over two years we will also reach a new, even broader audience.”