Ireland’s Super Bowl: How Rothco and AIB Changed the Game

Behind the Work 705 Add to collection 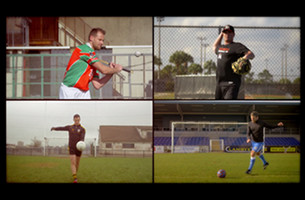 Sometimes – and it doesn’t happen very often – you stumble upon an advertising project that strikes the perfect balance between a laser-focused insight and a universal humanity that resonates far beyond its target audience. Dublin-based agency Rothco has been achieving that with its ongoing collaboration with banking brand AIB around the bank’s sponsorship of the Gaelic Athletics Association’s (GAA) local club-level Hurling and Gaelic Football championships. But two weeks ago they took that to the next level with a hugely popular documentary, broadcast on Irish channel TV3, that sent sports fans buzzing.

The Toughest Trade is an hour-long TV show spun off from the agency’s ‘Toughest’ campaign, that aims to show just how challenging amateur club level sport can be. The show sees disillusioned English Premiership footballer David Bentley and All Star baseball player Brian Schneider swap places with GAA footballer Aaron Kernan and hurler James Stephens. It’s been enormously popular with audiences and though for now it’s a one-off show, fans and pundits are clamouring for more unusual sports swaps.

To understand the power of the show, and AIB’s other ‘Toughest’ activities, it helps to understand the role that GAA sports play within the fabric of Irish culture and local communities.

“The Toughest Trade is actually about Ireland and how Irish life works,” explains Rothco creative director Bobby Byrne. “The GAA is at the heart of every parish. I think during the recession when every other institution in Ireland had crumbled, from the church to the banks to the government, the GAA was there throughout. It is a positive force in Irish life. That’s what you get from the Toughest Trade – it’s the glue of Irish life.”

Moving into the world of TV was an unusual and exciting challenge for the agency, particularly from a production point of view. “We’re all familiar with filmmaking as a craft but in terms of production it was very different,” says Bobby. “We’re not the experts. That’s why we got Motive involved and producer Ciaran O’Hara, who is actually a bit of a sports documentary powerhouse, and Ronan [O’Donoghue] the director. As soon as we met these guys we clicked with them.

“The relationship between an advertising production company and an advertising agency is very structured. There’s a dance that you do. With TV it’s just… we’re in this. It ended up being a small enough team and a tight one. It’s not the same as standing there asking people to do things twenty times.”

Motive producer Ciaran O’Hara proved particularly helpful when it came to casting – a passionate GAA fan, he was already familiar with Jackie and Aaron and was able to single them out as players with the skill, confidence and personality to engage TV audiences. As for the professional players, David Bentley (ex-Blackburn Rovers and Tottenham Hotspur) emerged as a possibility after the creative team heard him give an articulate interview on Irish radio about falling out of love with ‘the beautiful game’.

“If you watch the show, he’s a really hard-working kind of guy. The first night of training I think he was really struggling and the guys took turns hanging back and pushing him on. You can hear in the audio people shouting ‘come on David’. In fairness to him, it was the middle of February, there was really heavy rain, and he stuck with it. He could have walked away and he stuck with it, and, in turn, the players really respected him for that,” recalls Bobby. And viewers can witness the inspirational effect that playing with unpaid amateurs had on David, giving the journey unexpected emotional depth.

The ambitious idea for a Faking It-style reality TV show based around GAA players was one that the team at Rothco had been toying with for about a year before it made it to air. The concept was put on ice while the agency created a TV ad campaign and follow-up online campaign, all centred around the idea that club-level sport really was the ‘toughest’ of them all.

“We actually believe that the club game is tougher to win because it’s 13 games, knock out, played in the winter – you’ve got to manage your career and family as well,” says Bobby. “You can only choose your players from the local parish. You can’t buy in a player just because they’re good… you could be playing against a club team with six county players in it, you could play against one with none. Your county might get to an All-Ireland final once every ten years but the club might get there once every 100 years. It’s a really hard thing to win.”

After the success of the TV campaign, Mark Brennan, Head of Digital Marketing & Innovation at AIB (and former Business Director at adam&eveDDB and ex-head of Tribal DDB Dublin), gave the go-ahead for some more playful online work. The first piece of online content that really got tongues wagging was a hidden camera stunt starring Colm Cooper, a high-profile Gaelic footballer (‘the David Beckham of GAA,’ explains Bobby), who plays for the Kerry county team and local club team Dr Crokes. The Rothco crew wanted to test the depths of his feeling towards his local team – and though it was something he’d spoken about passionately in pre-production meetings, they wanted to see if he’d respond the same way away from the agency and client. After filming the official TV spot, Colm was picked up by a taxi only to be challenged by a wind-up merchant of a cabbie. Colm’s heartfelt honesty was caught on camera and has clocked up over a quarter of a million YouTube views.

Since then the online component of the campaign has proliferated, thanks to the support of the client at AIB. One more recent project to catch our eye was ‘The Toughest Choice’, a cheeky (and surprisingly emotional) film that saw Rothco head down to the All-Ireland County Finals last September to see if fans’ loyalty to their local club really would conquer all. Would fans tear up their coveted tickets to the big inter-county final match in exchange for €2,000 for their local amateur club?

The concept was devised by Paddy Thunder and Donal O’Higgins and the film was entirely street cast on match day. “The idea was to remind everyone that all these guys out on the field, playing for their county, started out playing for their club, and that was who they were. That message was a little bit cheeky. In fairness to the client, it was one with a bit of risk but they urged us on. Paddy and myself thought we would give it our best shot and it worked, the creatives and production were a tight little unit on the day and the director [Joe McElwaine] got the magic on the day, they knew what they were after,” says Bobby.

Despite the uncertainties going into the shoot, the film turned out to be another success (we challenge you to watch it and not get even a tiny bit moist around the eyes). “It brought the conversation around the biggest day in county sport back to the club level, which is what we set out to do,” reflects Bobby.

So far the team has achieved a huge amount for AIB’s GAA sponsorship. Colm’s Taxi and the TV campaign picked up several gongs at last year’s ICAD Awards (Ireland’s Institute of Creative Advertising and Design). What’s more, in a country that’s still recovering from the 2009 financial crash, they’ve managed to put a banking brand bang in the centre of community life.

Now that the bar has been raised, Rothco is looking to go further in 2015 – not least because AIB will be sponsoring both the club and county-level sports in the coming year, which will inevitably require the agency to move its strategy on.

In the meantime, the team at Rotcho are still experiencing the comedown from their electrifying TV production debut. And they deserve to enjoy it – in terms of that ad industry buzzword ‘branded entertainment’, it’s the kind of project that most agencies would swap their award cabinet for in a heartbeat.