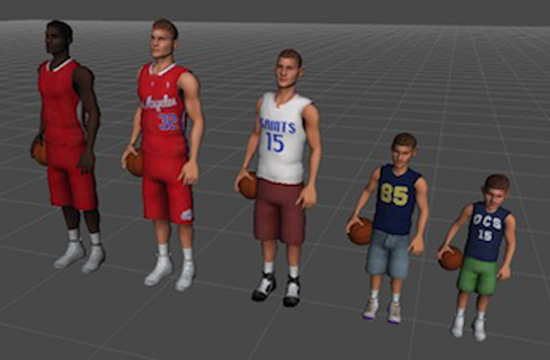 Los Angeles Clippers star forward Blake Griffin may be known for his impressive slam-dunk ability, but to capture those skills in 3D animation London design/animation studio We Are Formation turned to iPi Motion Capture to provide a layer of authenticity to Take On Blake – a Facebook game for automaker KIA’s Optima that allows players to create their own animated avatar and compete in a slam dunk contest against the NBA star.

Working with ad agency David & Goliath, El Segundo, CA, and London-based production company UNIT9, We Are Formation used iPi Motion Capture in conjunction with the Unity3D game engine to create all of the character animations and capture the dunks and other dramatic basketball moves with as much detail and realism as possible.

“We used iPi Soft with Lightwave 3D and with Maya, and the integration worked seamlessly with both,” Louis du Mont, We Are Formation’s Creative Director says. “Using standard biped FBX rigs with FK animation that was baked into IK controllers for further refining, iPi’s scalability proved extremely helpful. We captured our main motions with the six camera PlayStation Eye setup, but often needed to quickly re-capture the odd piece of idle animation, which we did easily in our studio with one Microsoft Kinect camera and not much space.”

“Take On Blake” features CG versions of Blake at ages 8, 12, 17 and 23 who compete against users that create their own personalized avatars -- complete with customized jerseys of their favorite NBA team and 3D face mapping -- in a tense battle over who can make the most impressive slam dunk.

“We used the motion capture data as a starting point for the animations, but we were then able to exaggerate and craft the final moves to give us exactly what we needed,” du Mont notes. “The most important part of this game were the dunks, and we wanted a balance between realism and hyper-realism. The dunks needed to be higher, stronger and more exaggerated than in real life, but without being too comical. iPi Motion Capture offered a wider capture area than the alternatives, and the cost and ease of use compared to other systems allowed us come in on budget and on schedule.”

Looking ahead, We Are Formation sees increased use of markerless motion capture on more casual/social games like “Take On Blake” in the future. “Modern mocap tools like iPI Motion Capture bring with them the ability to have customized, naturalistic bipedal movement without a huge investment in time and money,” du Mont says. “In the past, clients were wary when we mentioned the use of mocap for smaller projects, but now we consider it a time and money saver for creating natural looking movements from scratch.”