Gravity Road worked with Tom and his sons, Barney and Rufus to create the film 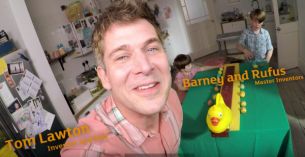 To celebrate never growing up, Gravity Road has enlisted British inventor, Tom Lawton to create a fun film that will inspire kids this Easter. The film sees Tom and his sons make the Ultimate Egg Rolling Machine – a mad, wacky take on the classic egg roll, using kinetic energy and a chain reaction sequence of obstacles.

An award-winning product design graduate, Tom’s fun and imaginative designs have received numerous awards and accolades in the UK and across the world. He also had a three part TV series Tom's Fantastic Floating Home on Channel 4, which looked at the world through the eyes of his son Barney. The series, which received rave reviews saw Tom and Barney build a magical floating home and fill it with mind bending prototype inventions that blew the conventional ways of doing things out of the water.

Gravity Road worked with Tom and his sons, Barney and Rufus to create the film, which starts off as though its shot in a deliberately low-fi hand-held style, to give an authentic perspective as though captured by Tom himself. The film will be shared on Sainsbury’s Facebook, Twitter and Instagram pages. It will then be shared on Tom’s social channels. To encourage other families and kids to be inventive this Easter, Tom has also created a ‘how to’ film to recreate the Ultimate Egg Rolling Machine

Gravity Road founding partner, Mark Boyd, said: “This was such a fun project to work on and we’re really pleased with the end result. Tom and his kids really are master inventors. So we hope the films encourage other kids and families to join in the fun activities this Easter and create their own egg-rolling machines.”